Note: The study considered decades of UV, decades of education,
but only tested vitamin D and lutein on a single day at age 72
Wonder why they did not look at the myopia boom occuring at younger ages
See also VitaminDWiki 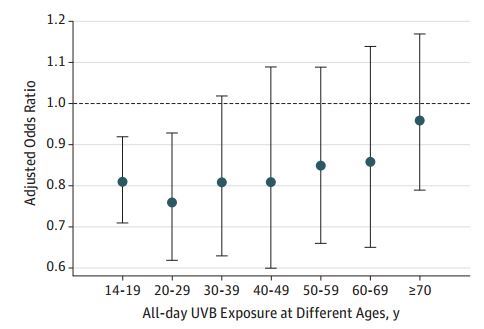 Importance Myopia is becoming increasingly common globally and is associated with potentially sight-threatening complications. Spending time outdoors is protective, but the mechanism underlying this association is poorly understood.

Design, Setting, and Participants A cross-sectional, population-based random sample of participants 65 years and older was chosen from 6 study centers from the European Eye Study between November 6, 2000, to November 15, 2002. Of 4187 participants, 4166 attended an eye examination including refraction, gave a blood sample, and were interviewed by trained fieldworkers using a structured questionnaire. Myopia was defined as a mean spherical equivalent of -0.75 diopters or less. Exclusion criteria included aphakia, pseudophakia, late age-related macular degeneration, and vision impairment due to cataract, resulting in 371 participants with myopia and 2797 without.

Conclusions and Relevance Increased UVB exposure was associated with reduced myopia, particularly in adolescence and young adulthood. The association was not altered by adjusting for education. We found no convincing evidence for a direct role of vitamin D in myopia risk. The relationship between high plasma lutein concentrations and a lower risk of myopia requires replication.