Small amount of lead in water drunk by mother rats
Vitamin D levels in blood substantially decreased in the breastfeeding infants
However, the effect was somewhat neutralized by increase in Vitamin D receptor activation
This study does not seem to indicate the VDR activation change
Thus the reader is not informed as to the change of Vitamin D getting to the cells due to Lead
The PDF includes many microphotographs of brain, etc. with/without lead 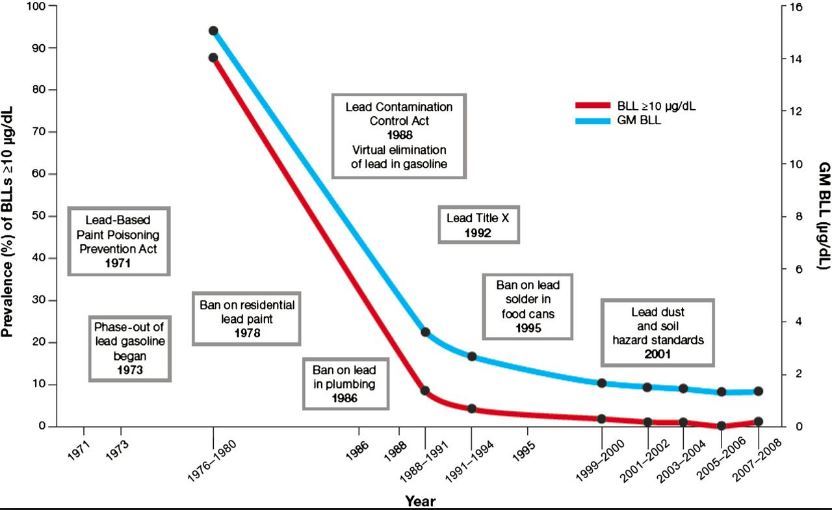 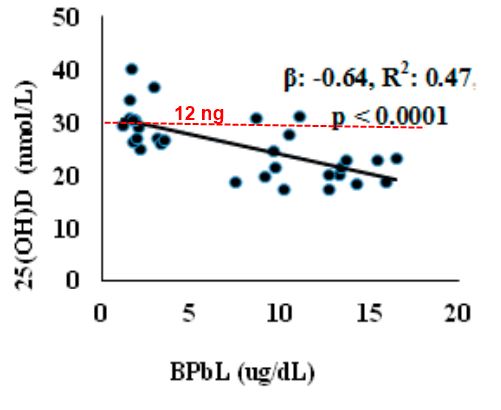 A negative association between blood lead and vitamin D concentrations has been reported, however, experimental data on the effect of lead (Pb) on vitamin D metabolism is scarce. We investigated the effects of Pb on serum vitamin D metabolites, vitamin D activating enzymes and vitamin D receptor (VDR) in rats. Newborn Wistar rat pups were exposed to 0.2% Pb-acetate via their dams’ drinking water from post-natal day (PND) 1 to 21 and directly in drinking water until PND30. Serum 25-hydroxyvitamin D was analyzed with LC-MS/MS and 1,25-dihydroxyvitamin D with an immunoassay. Tissue expression of vitamin D activating enzymes and VDR were measured by Western blot and immunohistochemistry. Serum 25-hydroxyvitamin D was significantly decreased at both PND21 and PND30, whereas 1,25-dihydroxyvitamin D was decreased (p < 0.05) only at PND21 in the Pb-exposed rats. Expression of renal 1-α-hydroxylase was decreased by Pb only at PND21 (p < 0.05) but the brain 1-α-hydroxylase was not affected. Hepatic 25-hydroxylase expression was significantly decreased at PND21 but significantly increased at PND30 by Pb exposure. VDR expression in the brain was increased at both PND21 and PND30 (p < 0.05). These results suggest that Pb interferes with vitamin D metabolism by affecting the expression of its metabolizing enzymes. View Full-Text

Lead in breastmilk reduced vitamin D levels in blood by a third (in rats) – Feb 2018         Printer Friendly PDF this page! Follow this page for updates
This page is in the following categories (# of items in each category)
Interactions with Vitamin D 109

Air pollution, toxins, heavy metals and smoking each result in lower Vitamin ...Is low level lead a factor in increase of diseasesLow Vitamin D is one of the causes of oxidative stress and aging – March 2019People working with lead have 8 ng less Vitamin D – May 2020