FIGURE 1 The relationship between latitude and allele frequency of HLA-DRB1*01:01 in 151 populations from around the world. Spearman rank correlation r = .609, P ≤ .001
The first evidence of a genetic link explaining why some people who catch COVID-19 don't become sick has been discovered.

A scientific and medical team led by Newcastle University, UK, have demonstrated that the gene, HLA-DRB1*04:01, is found three times as often in people who are asymptomatic. This suggests that people with this gene have some level of protection from severe COVID.

The study, funded by Innovate UK, the UK's innovation agency, compared asymptomatic people to patients from the same community who developed severe COVID but had no underlying illnesses, and is published today in the HLA journal.

The study team believe this is the first clear evidence of genetic resistance because this study compared severely affected people with an asymptomatic COVID group and used next generation sequencing to focus in detail and at scale on the HLA genes which are packed together on chromosome 6. Other studies have scanned the whole genome but that approach is less effective in the tissue typing complex.

Genome wide studies can be likened to a satellite image. The high density and complexity of the histocompatibility complex and variation in different populations means significant variation can be overlooked. For example, different alleles or versions of the same gene could have opposite effects on the immune response. This study was much more focused and compared symptomatic to asymptomatic in the same population revealing the "protective" qualities of the allele.

It is known that the human leukocyte antigen gene identified, HLA-DRB1*04:01, is directly correlated to latitude and longitude. This means more people in the North and West of Europe are likely to have this gene.

This suggests that populations of European descent will be more likely to remain asymptomatic but still transmit the disease to susceptible populations.

Dr. Carlos Echevarria from the Translational and Clinical Research Institute, Newcastle University who also works as a Respiratory Consultant in the Newcastle Hospitals NHS Foundation Trust and is a co-author of the paper says: "This is an important finding as it may explain why some people catch COVID but don't get sick.

"It could lead us to a genetic test which may indicate who we need to prioritize for future vaccinations."

"At a population level, this is important for us to know because when we have lots of people who are resistant, so they catch COVID but don't show symptoms, then they risk spreading the virus while asymptomatic."

The effect of genes being linked to geolocation is an accepted scientific concept and it is well known that HLA genes develop over generations in reaction to disease-causing pathogens.

Study author, David Langton, whose company ExplantLab helped fund the study through an Innovate UK research award, added: "Some of the most interesting findings were the relationships between longitude and latitude and HLA gene frequency. It has long been known that the incidence of multiple sclerosis increases with increasing latitude. This has been put down in part to reduced UV exposure and therefore lower vitamin D levels. We weren't aware, however, that one of the main risk genes for MS, that is DRB1*15:01, directly correlates to latitude.

"This highlights the complex interaction between environment, genetics and disease. We know some HLA genes are vitamin D responsive, and that low vitamin D levels are a risk factor for severe COVID and we are doing further work in this area."

`Hs~   NOTE: "Vitamin" does not occur once in the PDF text

The study used samples from 49 patients with severe COVID who had been hospitalized with respiratory failure, samples from an asymptomatic group of 69 hospital workers who had tested positive through routine blood antibody testing and a control group from a study into the relationship between HLA genotypes and the outcomes of joint replacement surgery.

The study used next generation sequencing machines to study the different versions, or alleles, of the HLA genes in depth which was combined with a variety of expertise and modeling. The research was limited to samples from North East England during the first lockdown. This reduced variation in the study groups but more studies will be needed in the UK and other populations as there may be different copies of the HLA genes providing resistance in other populations.

Co-author, Professor Sir John Burn, Professor of Clinical Genetics at Newcastle University said: "SARS Cov-2 is one of the greatest threats Mankind has faced. The more we understand why some people become sick, the better we can defend ourselves against this virus and others like it in future.”

HLA in Wikipedia - including increased risk of autoimmune diseases

Human leukocyte antigen
“The human leukocyte antigen (HLA) system or complex is a group of related proteins that are encoded by the major histocompatibility complex (MHC) gene complex in humans.1 These cell-surface proteins are responsible for the regulation of the immune system. Mutations in HLA genes may be linked to autoimmune disease such as type I diabetes, and celiac disease” 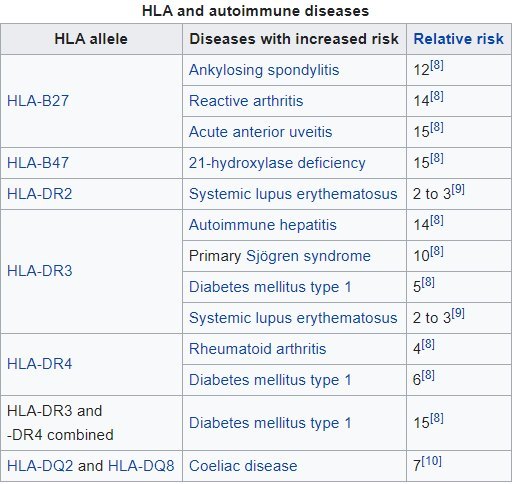 The impact of COVID-19 varies markedly, not only between individual patients but also between different populations. We hypothesised that differences in human leukocyte antigen (HLA) genes might influence this variation. Using next generation sequencing, we analysed the class I and class II classical HLA genes of 147 individuals of European descent experiencing variable clinical outcomes following COVID-19 infection. Forty-nine of these patients were admitted to hospital with severe respiratory disease. They had no significant pre-existing comorbidities. We compared the results to those obtained from a group of 69 asymptomatic hospital workers who evidence of COVID exposure based on blood antibody testing. Allele frequencies in both the severe and asymptomatic groups were compared to local and national healthy controls with adjustments made for age and sex. With the inclusion of hospital staff who had reported localised symptoms only (limited to loss of smell/taste, n = 13) or systemic symptoms not requiring hospital treatment (n = 16), we carried out ordinal logistic regression modelling to determine the relative influence of age, BMI, sex and the presence of specific HLA genes on symptomatology.
We found a significant difference in the allele frequency of HLA-DRB1*04:01 in the severe patient compared to the asymptomatic staff group (5.1% vs. 16.7%, P = .003 after adjustment for age and sex). There was a significantly lower frequency of the haplotype DQA1*01:01-DQB1*05:01-DRB1*01:01 in the asymptomatic group compared to the background population (P = .007). Ordinal logistic regression modelling confirmed the significant influence of DRB1*04:01 on the clinical severity of COVID-19 observed in the cohorts. These alleles are found in greater frequencies in the North Western European population. This regional study provides evidence that HLA genotype influences clinical outcome in COVID-19 infection. Validation studies must take account of the complex genetic architecture of the immune system across different geographies and ethnicities.
Clipped from PDF
Approximately 30% of Europeans carry DRB1*04, an allele with more than 50 subtypes.
Of all the DRB1*04 alleles, *04:01 is the most frequent allele occurring with a frequency of 57%

Autoimmune and Virus entries in VitaminDWiki

Lack of COVID-19 symptoms is 3X more likely if a specific HLA gene mutation (HLA is related to autoimmune diseases) – June 2021         Printer Friendly PDF this page! Follow this page for updates
This page is in the following categories (# of items in each category)
Autoimmune 184 Virus 1077