Iron added to cereal for 27 year-old women
Half of them got 1500 IU Vitamin D daily, but for only 8 weeks
Expect far better results if dose and duration had been increased
for example:3,000 IU for 15 weeks

Items in both categories Iron and Women are listed here:

Items in both categories Iron and Pregnancy are listed here: 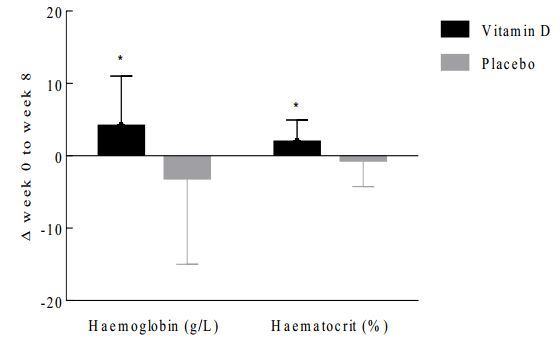 ABSTRACT
The effect of 38 pg (1500 IU) daily vitamin D3 supplementation, consumed with an iron-fortified
breakfast cereal for 8 weeks, on haematological indicators in iron-deficient female subjects was
investigated. Fifty iron-deficient subjects (plasma ferritin concentration < 20 pg/L; mean age ± SD:
27.4 ± 9.4 years) were randomised to consume an iron-fortified breakfast cereal containing 9 mg of
iron daily, with either a vitamin D3 supplement or placebo. Blood samples were collected at
baseline, interim (4 weeks) and post-intervention (8 weeks) for measurement of iron and vitamin D
status biomarkers. The effect of intervention was analysed using mixed-model repeated measures
ANOVA. Significant increases were observed in two main haematological indices: haemoglobin
concentration and haematocrit level from baseline to post-intervention in the vitamin D group, but
not in the placebo group. The increase from baseline to post-intervention in haemoglobin
concentration in the vitamin D group (135 ± 11 to 138 ± 10 g/L) was significantly higher compared
to the placebo group (131 ± 15 to 128 ± 13 g/L) (P=0.037). The increase in haematocrit level from
baseline to post-intervention was also significantly higher in the vitamin D group (42.0 ± 3.0 to 43.8
± 3.4%) compared to the placebo group (41.2 ± 4.3 to 40.7 ± 3.6%) (P=0.032). Despite the non-
significant changes in plasma ferritin concentration, this study demonstrates that 38 pg
supplemental vitamin D, consumed daily, with iron-fortified breakfast cereal led to improvement in
haemoglobin concentration and haematocrit levels in women with low iron stores. These findings
may have therapeutic implications in the recovery of iron status in iron-deficient populations at a
healthcare level.

Iron increased slightly by small amount of Vitamin D for a short time – RCT Feb 2019         Printer Friendly PDF this page! Follow this page for updates
This page is in the following categories (# of items in each category)
Women 165 Vitamin D and Iron 64