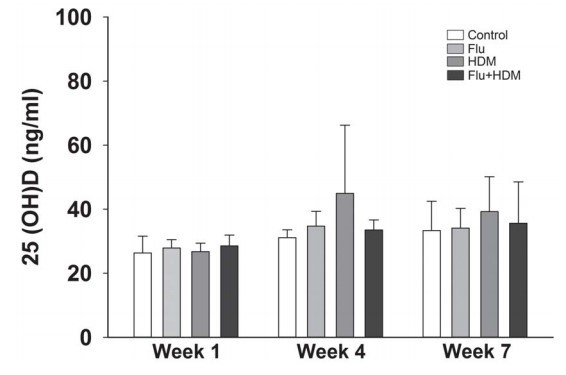 Low circulating levels of 25-hydroxyvitamin D [25(OH)D] are associated with chronic lung diseases such as asthma. However, it is unclear whether vitamin D is involved in disease pathogenesis or is modified by the inflammation associated with the disease process. We hypothesized that allergic inflammation decreases the level of circulating 25(OH)D and tested this using a mice model of house dust mite (HDM) induced allergic airway inflammation. Cellular influx was measured in bronchoalvelar lavage (BAL) fluid, and allergic sensitization and 25(OH)D levels were measured in serum. Exposure to HDM caused a robust inflammatory response in the lung that was enhanced by prior influenza infection. These responses were not associated with any change in circulating levels of 25(OH)D. These data suggest that alterations in circulating 25(OH)D levels induced by Th-2 driven inflammation are unlikely to explain the cross-sectional epidemiological association between vitamin D deficiency and asthma.

BACKGROUND:
The relationship between atopic dermatitis (AD) and low vitamin D levels has been studied. Emerging evidence has implicated vitamin D as a critical regulator of immunity, playing a role in both the innate and cell-mediated immune systems. However, the effect of vitamin D on house dust mite (HDM) sensitization in patients with AD has not been established.

OBJECTIVE:We investigated the association between vitamin D levels and HDM sensitization according to AD severity.

CONCLUSION:
Our results demonstrate that low vitamin D levels may link to high HDM sensitization in patients with the severe AD. Further elucidation of the role of vitamin D in HDM sensitization may hold profound implications for the prevention and treatment of AD.

Inflammation due to house dust mite did not change vitamin D levels in mice – Nov 2014         Printer Friendly PDF this page! Follow this page for updates
This page is in the following categories (# of items in each category)
Breathing 402