Variation Trend of Vitamin D Status in Wintertime Among Infants: A Cross-sectional Study 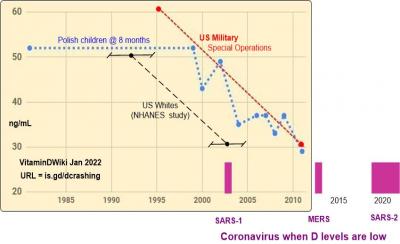 Levels can be quickly increased

Background The requirement of vitamin D in different stage may be diverse, but research on the variation trend of vitamin D status during infancy is scarce.

Objective This study aimed to explore the variation trend of vitamin D status and influencing factors of vitamin D deficiency and insufficiency during wintertime among infants.

Methods A cross-sectional study was conducted. A total of 500 infants were included in our study during January to March 2017. The serum 25(OH)D was performed by chemiluminescent assay. Multivariate Logistic regression was conducted to evaluate the influencing factors of vitamin D deficiency and vitamin D insufficiency.

Infant Vitamin D doubles 6 months after birth (can double in 2 weeks)– Oct 2019         Printer Friendly PDF this page! Follow this page for updates
This page is in the following categories (# of items in each category)
Loading dose for Vitamin D 167 Infant-Child 629