3 studies on this page

"20% increase in the odds of vitamin D deficiency" 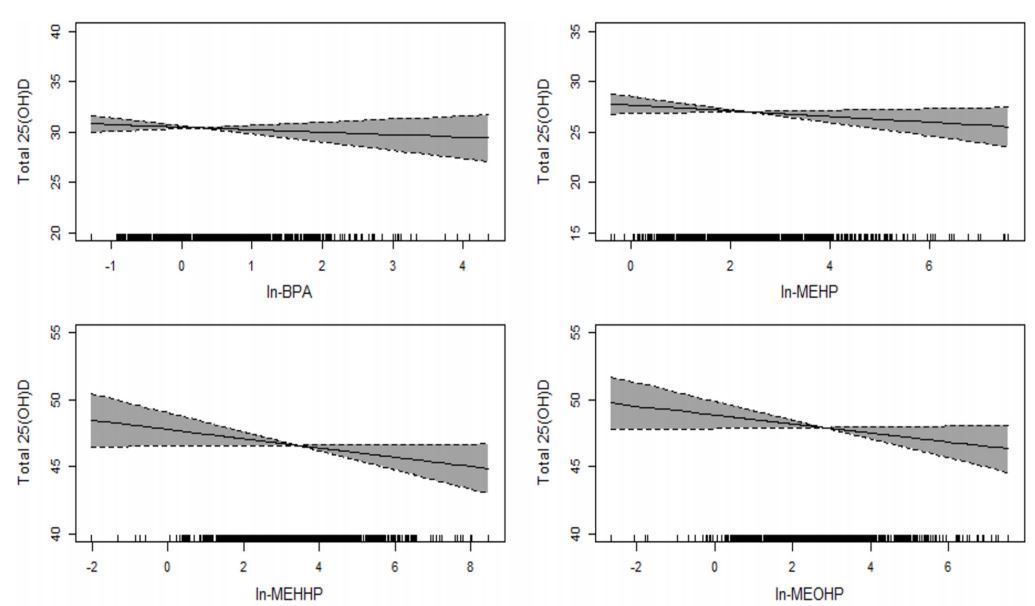 Background: In addition to its well-established role in maintaining skeletal health, vitamin D has essential regulatory functions in female reproductive and pregnancy outcomes. Phthalates and bisphenol A (BPA) are endocrine disruptors, and previous research has suggested that these chemical agents may disrupt circulating levels of total 25(OH)D in adults.

Objectives: We investigated the relationships between repeated measures of urinary phthalate metabolites and BPA and circulating total 25(OH)D in a prospective cohort of pregnant women.

Methods: The present study population includes participants (n = 477) in a nested case-control study of preterm birth drawn from a prospective birth cohort of pregnant women at Brigham and Women’s Hospital in Boston, Massachusetts. Urine and blood samples were collected for biomarker measurements at median 10 wk and 26 wk of gestation.

Results: In repeated measures analysis, we observed that an interquartile range (IQR) increase in urinary mono-3-carboxypropyl phthalate (MCPP) was associated with a 4.48% decrease [95% confidence interval (CI): -7.37, -1.58] in total 25(OH)D. We also detected inverse associations for metabolites of di(2-ethylhexyl) phthalate (DEHP) [percent difference (%A) = — 2.83 to -2.16]. For BPA, we observed a nonsignificant inverse association with total 25(OH)D in the overall population. Our sensitivity analysis revealed that the associations for some metabolites (e.g., MEHP) varied by race/ethnicity, which may reflect potential differences in susceptibility. In agreement with findings from repeated measures analysis, we reported that DEHP metabolites and BPA were significantly associated with an approximate 20% increase in the odds of vitamin D deficiency (<20ng/mL) [odds ratio (95% CI): 1.19 (1.06, 1.35) for molar sum of DEHP metabolites and 1.22 (1.01, 1.47) for BPA] at median 10 wk and 26 wk, respectively.

Conclusions: Our results provide suggestive evidence of the potential for environmental exposure to phthalates and/or BPA to disrupt circulating vitamin D levels in pregnancy. https://doi.org/10.1289/EHP1178

Relationships Between Urinary Phthalate Metabolite and Bisphenol A Concentrations and Vitamin D Levels in U.S. Adults:

CONTEXT: Recent research suggests that environmental exposure to endocrine-disrupting chemicals may alter circulating 25-hydroxyvitamin D [25(OH)D] levels in humans. To date, no studies have assessed the associations between phthalates and bisphenol A (BPA) and total 25(OH)D in the U.S. general population.

OBJECTIVE: To explore relationships between urinary concentrations of 11 phthalate metabolites and BPA and serum total 25(OH)D in a representative sample of U.S. adults.

RESULTS: Metabolites of di(2-ethylhexyl) phthalate (DEHP) were consistently inversely associated with total 25(OH)D in the overall study population and in gender-stratified models. In the overall population, we detected a significant inverse relationship for the molar sum of DEHP metabolites (ΣDEHP), where an interquartile range increase in ΣDEHP was associated with a 1.90% decrease (95% confidence interval [CI], -3.64, -0.17) in total 25(OH)D. A positive association was detected for monoethyl phthalate. For BPA, we found a statistically significant inverse relationship in women, but not in men.

CONCLUSIONS: Overall, our results provide suggestive evidence that environmental exposure to phthalates and BPA may alter circulating levels of total 25(OH)D in adults. Future human and animal studies are required to resolve the direction, temporality, and impact of these relationships.

Increase of plastic compounds (phthalates) in urine during pregnancy associated with decreased Vitamin D – Aug 2017         (Cached) Printer Friendly PDF this page! Follow this page for updates
This page is in the following categories (# of items in each category)
Pregnancy 826 Interactions with Vitamin D 106