Items in both categories Pregnancy and Cognitive are listed here: 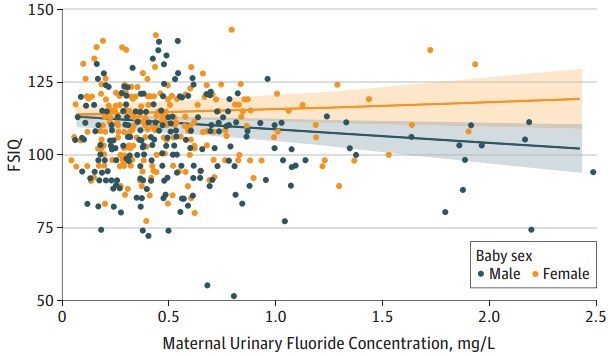 Importance The potential neurotoxicity associated with exposure to fluoride, which has generated controversy about community water fluoridation, remains unclear.

Objective To examine the association between fluoride exposure during pregnancy and IQ scores in a prospective birth cohort.

Design, Setting, and Participants This prospective, multicenter birth cohort study used information from the Maternal-Infant Research on Environmental Chemicals cohort. Children were born between 2008 and 2012; 41% lived in communities supplied with fluoridated municipal water. The study sample included 601 mother-child pairs recruited from 6 major cities in Canada; children were between ages 3 and 4 years at testing. Data were analyzed between March 2017 and January 2019.

Main Outcomes and Measures Children’s IQ was assessed at ages 3 to 4 years using the Wechsler Primary and Preschool Scale of Intelligence-III. Multiple linear regression analyses were used to examine covariate-adjusted associations between each fluoride exposure measure and IQ score.

Conclusions and Relevance In this study, maternal exposure to higher levels of fluoride during pregnancy was associated with lower IQ scores in children aged 3 to 4 years. These findings indicate the possible need to reduce fluoride intake during pregnancy.

IQ 4 points lower in male children if fluoridated water while pregnant (perhaps Magnesium) – Aug 2019         Printer Friendly PDF this page! Follow this page for updates
This page is in the following categories (# of items in each category)
Pregnancy 794 Vitamin D and Magnesium 273 Cognitive 309

Hypothesis: Fluoridation reduces magnesium in bodyInfluence diagram for vitamin D and cognition - 2008Most of the world does not have Fluoride in the water (lowers levels of Magne...