IBD helped by vitamin D but reluctant to state who helped, in what form, and how much – review Nov 2014

Vitamin D Therapy in Inflammatory Bowel Diseases who, in what form, and how much? 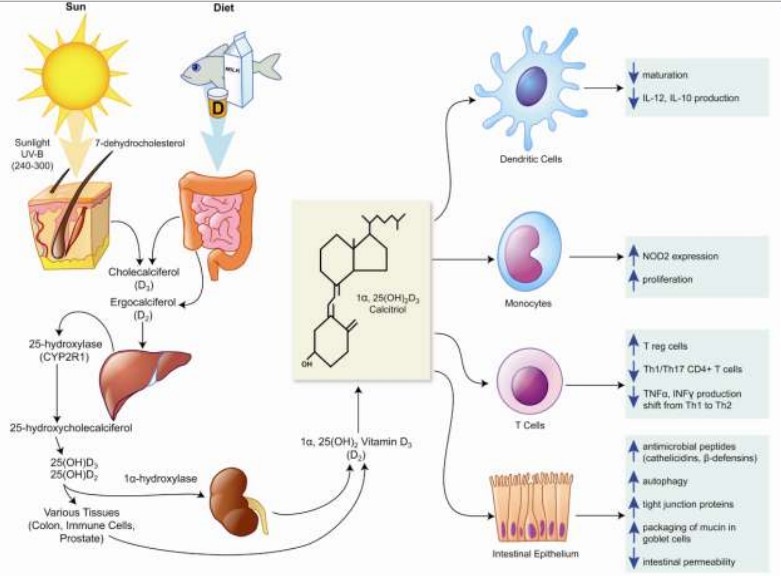 Background: The north–south geographical gradient of inflammatory bowel disease (IBD) prevalence, the epidemiology of IBD and its genetic association with vitamin D receptor polymorphisms, and results in animal models suggest that vitamin D plays an important role in the pathogenesis of IBD.

Aims: The purpose of this review was to critically appraise the effectiveness and safety of vitamin D therapy in patients with IBD.

Methods: MEDLINE, Scopus and Google Scholar were searched from inception to 20th May 2014 using the terms ‘Crohn’s disease’, ‘ulcerative colitis’ and ‘vitamin D’.

Results: Vitamin D deficiency is common in patients with IBD. Limited clinical data suggest an association between low vitamin D concentration and increased disease activity in both ulcerative colitis (UC) and Crohn’s disease (CD). To date, only two small open label trials and one randomised controlled trial have shown a positive effect of vitamin D supplementation on disease activity in patients with CD but not UC.
An optimal vitamin D supplementation protocol for patients with IBD remains undetermined, but targeting serum 25(OH)D levels between 30 and 50 ng/ml appears safe and may have benefits for IBD disease activity. Depending on the baseline vitamin D serum concentration, ileal involvement in CD, body mass index and, perhaps, smoking status, daily vitamin D doses between 1800–10,000 IU/day are probably necessary.

Conclusion: Increasing pre-clinical and clinical evidence suggests a role for vitamin D deficiency in the development and severity of IBD. The possible therapeutic role of vitamin D in patients with IBD merits continued investigation.

The TOP articles in Gut and Vitamin D are listed here:

IBD helped by vitamin D but reluctant to state who helped, in what form, and how much – review Nov 2014         Printer Friendly PDF this page! Follow this page for updates
This page is in the following categories (# of items in each category)
Gut 177