Why Does Australia Appear to Have the Highest Rates of Food Allergy?

&nbspDownload the PDF of first page from VitaminDWiki

Note: hypothesis #1 and #2 would also be true anywhere around the world,

But only Australia has the most infants allergic to food

Australia started their avoidance of the sun campaign in the 1980s 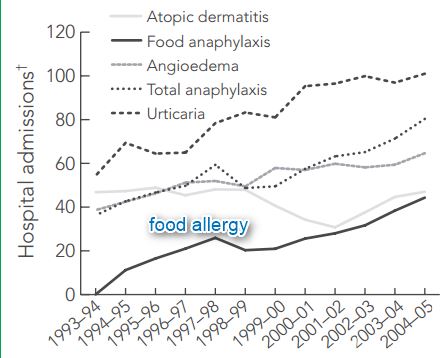 from   PDF on VitaminDWiki

Pages listed in BOTH the Autoimmune and Australia-NZ

Hypothesis – Australia has highest rate of food allergy due to avoiding the sun – Sept 2015         Printer Friendly PDF this page! Follow this page for updates
This page is in the following categories (# of items in each category)
Autoimmune 184 Vitamin D in Australia and New Zealand 64 Infant-Child 702

Huge increase in food allergies in Australia may be due to low vitamin DNew Zealand – new 50,000 IU vitamin D capsule has soy which can cause allergi...Peanut and Food allergies prevented by Vitamin DPrevalence and Severity of Food Allergies Among US Adults (vitamin D is not m...