VitaminDWiki is documenting the employer benefits by giving Vitamin D to employees
Criteria for consideration: 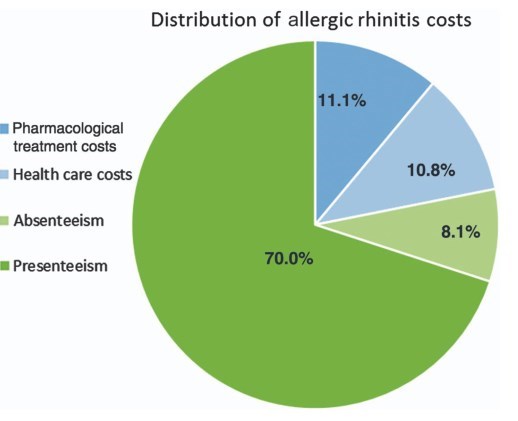 Abstract Allergic rhinitis is a global illness with a well-recognised impact on quality of life and work performance. Comparatively little is known about the extent of its economic impact on society. The TOTALL study estimates the total cost of allergic rhinitis using a sample representing the entire Swedish population of working age. A questionnaire focused on allergic rhinitis was mailed out to a random population of Swedish residents, aged 18–65 years. Health-care contacts, medications, absenteeism (absence from work) and presenteeism (reduced working capacity at work) were assessed, and the direct and indirect costs of allergic rhinitis were calculated. Medication use was evaluated in relation to the ARIA guidelines. In all, 3,501 of 8,001 (44%) answered the questionnaire, and 855 (24%) of these reported allergic rhinitis. The mean annual direct and indirect costs because of allergic rhinitis were €210.3 and €750.8, respectively, resulting in a total cost of €961.1 per individual/year. Presenteeism represented 70% of the total cost. Antihistamines appear to be used in excess in relation to topical steroids, and the use of nasal decongestants was alarmingly high.
The total cost of allergic rhinitis in Sweden, with a population of 9.5 million, was estimated at €1.3 billion annually. These unexpectedly high costs could be related to the high prevalence of disease, in combination with the previously often underestimated indirect costs. Improved adherence to guidelines might ease the economic burden on society.

Editorial Summary: Allergies: Hay fever costly to Swedish society
Allergic rhinitis, commonly known as hay fever, costs Swedish society €1.3 billion annually. Johan Hellgren and colleagues from the Swedish Rhinologic Research Alliance and the Swedish Institute for Health Economy sent questionnaires to a random population of Swedish residents aged 18-65 years. Nearly a quarter of the 3,501 responders were found to suffer from allergic rhinitis. The team calculated the direct and indirect costs of allergic rhinitis by assessing health-care contacts, medications, absence from work and reduced capacity while working. The total annual cost of the disease was estimated at €961 per person affected. Working while incapacitated by the condition represented 70% of the total cost. The use of nasal decongestant and steroid spray was similar (~40%). The team says improved adherence to treatment guidelines may ease the economic burden of the disease.

Nasal Allergies: More Than a Nuisance US News March 2019

Poll of people with allergies

Hay fever decreases productivity         Printer Friendly PDF this page! Follow this page for updates
This page is in the following categories (# of items in each category)
Breathing 428 Autoimmune 186 Cost savings with Vitamin D 143