Background/Aims: Cardiovascular disease partially originates from poor environmental and nutritional conditions in early life. Lack of micronutrients like 25 hydroxy vitamin D3 (25OHD) during pregnancy may be an important treatable causal factor. The present study explored the effect of maternal 25OHD deficiency on the offspring.

Methods: We performed a prospective observational study analyzing the association of maternal 25OHD deficiency during pregnancy with birth outcomes considering confounding. To show that vitamin D deficiency may be causally involved in the observed associations, mice were set on either 25OHD sufficient or insufficient diets before and during pregnancy. Growth, glucose tolerance and mortality was analyzed in the F1 generation.

Results: The clinical study showed that severe 25OHD deficiency was associated with low birth weight and low gestational age. ANCOVA models indicated that established confounding factors such as offspring sex, smoking during pregnancy and maternal BMI did not influence the impact of 25OHD on birth weight. However, there was a significant interaction between 25OHD and gestational age. Maternal 25OHD deficiency was also independently associated with low APGAR scores 5 minutes postpartum. The offspring of 25OHD deficient mice grew slower after birth, had an impaired glucose tolerance shortly after birth and an increased mortality during follow-up.

Conclusions: Our study demonstrates an association between maternal 25OHD and offspring birth weight. The effect of 25OHD on birth weight seems to be mediated by vitamin D controlling gestational age. Results from an animal experiment suggest that gestational 25OHD insufficiency is causally linked to adverse pregnancy outcomes. Since birth weight and prematurity are associated with an adverse cardiovascular outcome in later life, this study emphasizes the need for novel monitoring and treatment guidelines of vitamin D deficiency during pregnancy. 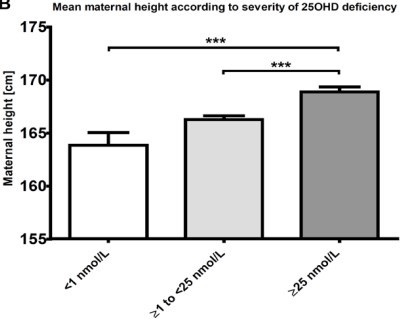 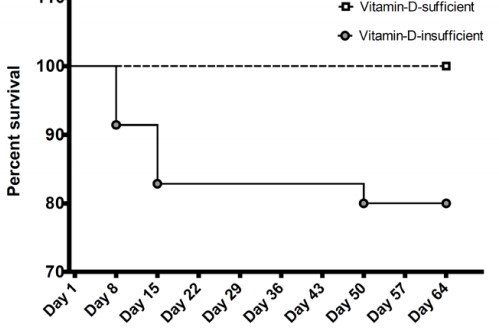 (Cached) Printer Friendly PDF this page! Follow this page for updates
This page is in the following categories (# of items in each category)
Infant-Child 589
Edit Comments Files 4