Exposing some blood to Ultraviolet light has treated various health problems, then antibiotics came along – April 2016

Ultraviolet blood irradiation: Is it time to remember “the cure that time forgot”? (book chapter) 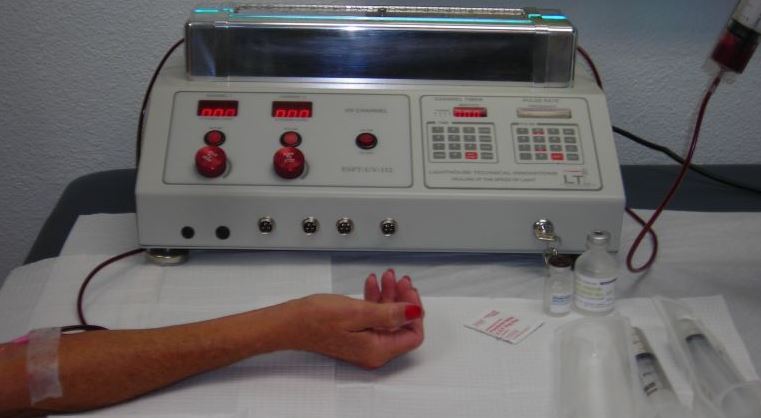 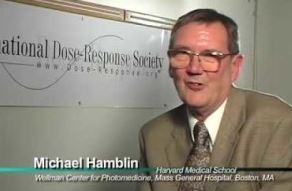 WHAT IS ULTRAVIOLET BLOOD IRRADIATION (UBI) AND HOW IS IT USED IN TREATMENTS? Nov 2016

Founder of VitaminDWiki wonders
Is the benefit due to creating Vitamin D directly in the blood?
If so, a 300 nm wavelength used to produce Vitamin D in the skin should be explored

UV Light does not get thru skin very far 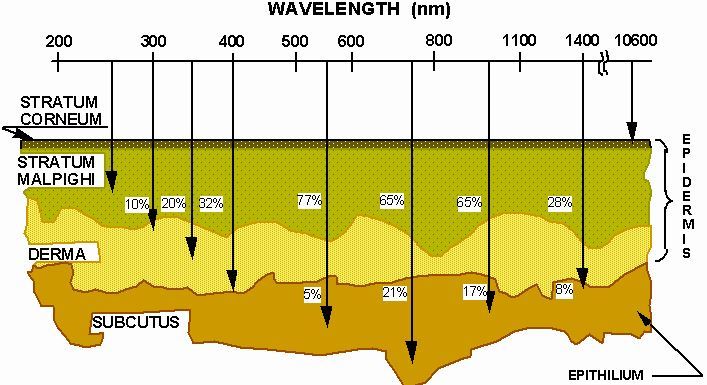 Blood vessels are just below the dermis 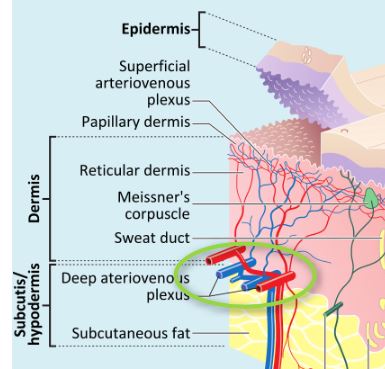 Ultraviolet blood irradiation (UBI) was extensively used in the 1940s and 1950s to treat many diseases including septicemia, pneumonia, tuberculosis, arthritis, asthma and even poliomyelitis. The early studies were carried out by several physicians in USA and published in the American Journal of Surgery. However with the development of antibiotics, the use of UBI declined and it has now been called “the cure that time forgot”. Later studies were mostly performed by Russian workers and in other Eastern countries, and the modern view in Western countries is that UBI remains highly controversial. This review discusses the potential of UBI as an alternative approach to current methods used to treat infections, as an immune-modulating therapy and as a method for normalizing blood parameters. Low and mild doses of UV kill microorganisms by damaging the DNA, while any DNA damage in host cells can be rapidly repaired by DNA repair enzymes. However the use of UBI to treat septicemia cannot be solely due to UV-mediated killing of bacteria in the bloodstream, as only 5–7% of blood volume needs to be treated with UV to produce the optimum benefit, and higher doses can be damaging. There may be some similarities to extracorporeal photopheresis (ECP) using psoralens and UVA irradiation. However there are differences between UBI and ECP in that UBI tends to stimulate the immune system, while ECP tends to be immunosuppressive. With the recent emergence of bacteria that are resistant to all known antibiotics, UBI should be more investigated as an alternative approach to infections, and as an immune-modulating therapy.

Sections of the PDF

UBI has always caused much confusion, both in the general public and also in some medical professionals, because germicidal UV light (UVC) is used to sterilize water, disinfect surfaces, and as an aid to infection control in operating rooms, and food processing and packaging plants. Many people therefore assume that UBI must act by killing pathogens (bacteria, viruses or other microorganisms) circulating in the bloodstream. However there is no evidence that this is actually the case. Therefore the mechanisms of action must lie in some other action of UV on the various components of blood. Although the entire body of evidence on the mechanisms of action of UBI is very complex, as can be seen from the foregoing material, we can attempt to draw some general conclusions. Firstly UBI is clearly an example of the well-known phenomenon called “hormesis” or “biphasic dose response’. This phenomenon has been well reviewed by Edward Calabrese from U Mass Amherst [73, 74]. The basic concept states that any toxic chemical substance or drug, or any physical insult (such as ionizing radiation, hyperthermia, or oxidative stress) can be beneficial, protective or even therapeutic, provided the dose is low enough. If the dose is increased, the beneficial or protective effects disappear, and if the dose is even further increased, then the detrimental effects of the treatment become very evident. This is clearly shown by Knott’s original experiments on dogs that led to the establishment of only 5-7% of total blood volume as the optimal amount of blood to be irradiated.
UBI appears to have three broadly different classes of effects on different blood components. In the case of neutrophils, monocytes, macrophages, and dendritic cells, UBI can activate phagocytosis, increase the secretion of NO and reactive nitrogen species, and convert the DC phenotype from an immunogenic one into a tolerogenic one, thus perhaps lessening the effects of a “cytokine storm” as is often found in sepsis. In the case of lymphocytes, the effects of UBI are to inhibit (or in fact kill) various classes of lymphocytes. This is not perhaps very surprising, considering the well-established cell-death pathways and apoptotic signaling found in lymphocytes. However it is not impossible, that the killing of circulating lymphocytes could reduce systemic inflammation, which would again be beneficial in cases of sepsis. It is also clear that UBI can oxidize blood lipids and lipoproteins, and therefore increase oxidative stress. However it is also possible that a brief burst of oxidative stress, may be beneficial, whereas continued chronic levels of oxidative stress have been generally considered as detrimental. Many antioxidant defenses are up- regulated by brief exposure to oxidative stress, and this has been postulated to be one of the fundamental mechanisms responsible for may aspects of hormesis. The oxidative nature of UBI has encouraged us to draw parallels with ozone therapy and other forms of ‘oxygen therapy”.

Modern Devices to Carry Out UBI

Although it is often said that UBI is “the cure that time forgot” [90, 91], it has not actually been completely forgotten. There are several companies, organizations and devices existing at the present time, which are being used or proposed (on a rather small scale) to carry out UBI, or as it often called “Photoluminescence Therapy (PT)”. Several websites provide information on UBI and PT. Perhaps one of the most comprehensive is (http://www.mnwelldir.org/docs/uv_light/uv_ light3.htm) that provides a listing of practitioners located in USA that offer UBI to patients. UBI medical (http://ubimedical.com/about-us.html) also has a lot of information available. The website entitled “Infections cured” (http://infections- cured.com) is also worth checking out. Physicians UBI Awareness Center (http://drsubi.com) even has a video posted online comparing different kinds of UBI machines.

UV irradiation of blood was hailed as a miracle therapy for treating serious infections in the 1940s and 1950s. In an ironic quirk of fate, this historical time period coincided with the widespread introduction of penicillin antibiotics, which were rapidly found to be an even bigger medical miracle therapy. Moreover another major success of UBI, which was becoming increasingly used to treat polio, was also eclipsed by the introduction of the Salk polio vaccine in 1955 [91]. UBI had originally been an American discovery, but then was transitioned to being more studied in Russia and other eastern countries, which had long concentrated on physical therapies for many diseases, which were more usually treated with drugs in the West.
However in the last decade the problem of multi-antibiotic resistant bacteria has grown relentlessly. Multidrug-resistant (MDR) and pandrug resistant (PDR) bacterial strains and their related infections are emerging threats to public health throughout the world [92]. These are associated with approximately two-fold higher mortality rates and considerably prolonged hospital admissions [93]. The infections caused by antibiotic resistant strains are often exceptionally hard to treat due to the limited range of therapeutic options [94]. Recently in Feb 2015, the Review on Antimicrobial Resistance stated “Drug-resistant infections could kill an extra 10 million people across the world every year by 2050 if they are not tackled. By this date they could also cost the world around $100 trillion in lost output: more than the size of the current world economy, and roughly equivalent to the world losing the output of the UK economy every year, for 35 years” [95].
Sepsis is an uncontrolled response to infection involving massive cytokine release, widespread inflammation, which leads to blood clots and leaky vessels. Multi-organ failure can follow. Every year, severe sepsis strikes more than a million Americans. It is estimated that between 28-50% percent of these people die. Patients with sepsis are usually treated in hospital intensive care units with broad-spectrum antibiotics, oxygen and intravenous fluids to maintain normal blood oxygen levels and blood pressure. Despite decades of research, no drugs that specifically target the aggressive immune response that characterizes sepsis have been developed.
We would like to propose that UBI be reconsidered and re-investigated as a treatment for systemic infections caused by multi-drug resistant Gram-positive and Gram-negative bacteria in patients who are running out of (or who have already run out) of options. Patients at risk of death from sepsis could also be considered as candidates for UBI. Further research is required into the mechanisms of action of UBI. The present confusion about exactly what is happening during and after the treatment is playing a large role in the controversy about whether UBI could ever be a mainstream medical therapy, or must remain side-lined in the “alternative and complementary” category where it has been allowed to be forgotten for the last 50 years.

Exposing some blood to Ultraviolet light has treated various health problems, then antibiotics came along – April 2016         (Cached) Printer Friendly Follow this page for updates
This page is in the following categories (# of items in each category)
UV and Vitamin D 266 Immunity 224