http://www.frost.com/prod/servlet/market-insight-print.pag?docid=196049778
Vitamin D is a well-known ingredient in the bone health sector. Often known as calciferol, it contributes to the maintenance of normal levels of calcium and phosphorus in the bloodstream, which are required for healthy bones. Vitamin D is frequently used in combination with calcium. Plethora of clinical evidence illustrates the bone health benefits of vitamin D.

Recently, bone health has gained immense significance amongst consumers throughout the world. According to the International Osteoporosis Foundation, fracture as a result of osteoporosis occurs every 30 seconds, and with an aging population, the yearly incidence of hip fracture alone in Europe is expected to more than double from approximately 500,000 to 1,000,000 over the next 50 years. With more than 44 million Americans suffering from osteoporosis (Source: National Osteoporosis Foundation), it is apparent that bone health is one of the well-established and most popular segments amongst people in the United States. The key ingredients in this sector can be classified as those ingredients that directly impact the bone health and those that indirectly aid in maintaining bone health. The most recognised and established ingredients, such as calcium and vitamin D, fall under the former category. Both calcium and vitamin D have a long history of safe use in the market and benefit from strong consumer awareness. In addition, ingredients such as prebiotics and soy isoflavones indirectly aid the maintenance of bone health. These ingredients are complementary to calcium and vitamin D, and function by the way of either enhancing absorption or by reducing the loss of minerals in the body.

While vitamin D is renowned for its bone health benefits, it is increasingly evident that the benefits offered by this ingredient are not limited to the aforementioned. Traditionally, vitamin D always piggy-backed on the credentials of calcium as a nutrient that is required for the proper absorption and utilization of calcium. Thus, any bone health product in the market with calcium would also include vitamin D in it.
However, the nutraceuticals industry started witnessing influx of science supporting the distinct benefits of vitamin D since early 2000. The growing array of health benefits of vitamin D includes prevention of fall and neuromuscular function, improved immunity, insulin response and gastrointestinal health. Fall prevention is one of the critical benefits conferred by the vitamin, which is a major risk factor for those with osteoporosis. In addition to the expanding portfolio of health benefits, a growing number of scientific evidence is demonstrating the prevailing deficiency of this crucial vitamin. In fact, recent studies suggest that the rate of vitamin D deficiency in the United States and Europe is on a steady high.
Adding credence to the statistics is the recent demand of the scientific community to revise the daily intake values of vitamin D. With an avalanche of scientific support on the benefits of vitamin D intake, scientists are now proposing an increase in the recommended daily intake (RDI) to 2000 IU, which is yet to receive the much needed regulatory approval. In addition, companies like Kraft have petitioned for an increase in the amount of vitamin D to be added to their foods.

The vitamin D market has been witnessing an upswing due to the growing focus on the vitality and prevailing nutritional gap of this vitamin. Endorsements by celebrities, media, general practitioners and key opinion leaders have translated into an increase in the retail value of vitamin D supplements. For example, there was a jump in vitamin D supplement sales after Oprah Winfrey suggested on her show {Jan 2008} that the actual adequate intake of vitamin D is five times the current RDI. It is observed that vitamin D supplements sales increased by a whooping 127 percent in 2008 and 117 percent in the first quarter of 2009 in the United Sates alone. Although the supplements market is the largest end-user for vitamin D, it is also used extensively in food fortification. A wide range of dairy products such as milk, cheese and infant formula are fortified with vitamin D. It is also used to fortify a variety of fruit juices, the most popular one being orange juice with vitamin D.
The growing scientific evidence of the wide array of health benefits and the scientific community’s endorsement of the need for a revised RDI are anticipated to keep up the high demand for vitamin D supplements and enriched foods. One of the recent reports in pediatrics revealed that most kids in the United States do not obtain adequate vitamin D. Analysis of the data from the 2001-2004 National Health and Nutritional Examination Survey reveals that 9.0 percent of the children were classified as deficient and a greater 61 percent were classified as "insufficient" in vitamin D. The existing deficiency/insufficiency and “need” for greater levels of vitamin D present viable opportunities for the expansion of the vitamin D market. 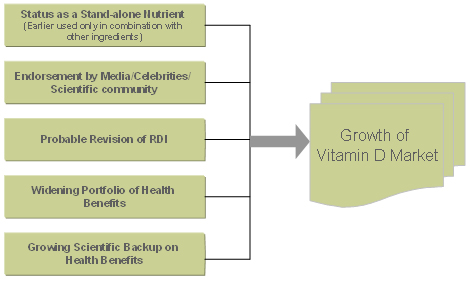 The regulatory standards are undoubtedly the primary factor holding back the potential boom of the vitamin D market. For example, fortifying foods with vitamin D is not permitted in Europe unless specifically provided for in the legislation or by authorisation from a higher authority. Unlike the United States where fortification of milk with Vitamin D is mandated, the milk manufacturers in the United Kingdom do not fortify because they sell non-synthesised milk, which is argued to retain its natural vitamin D content.
However, this scenario is undergoing a gradual shift. The fortification of fluid milks and margarine products has become compulsory in Finland and other northern European countries. A new law implemented in 2003 permitted 10 mg per 100 g of vitamin D in edible fats. Denmark was the first of the European countries to run a campaign promoting vitamin D supplements.
For the manufacturers, poor stability of vitamin D would challenge the penetration of the functional food sector. Presently, vitamin D fortification is used only in cold processed foods. Stability depends largely on the effect of time and temperature on the shelf life of vitamin D fortified foods. Vitamin D being a highly sensitive ingredient, it cannot be added in equivalent quantities as that of dietary supplements. Thus, it is likely that dietary supplements would be the dominating channel for vitamin D. Nevertheless, it is observed that many ingredients have successfully overcome similar challenges in their respective markets in the past. Omega-3 is an example of one such ingredient that has to a large extent overcome many of the processing challenges it faced. Other examples include botanical extracts such as rosemary and green tea and a wide range of vitamins and minerals that are widely used in a variety of applications. With manufacturers continually working toward enhancement of the functionality of the vitamin, it is rational to expect that the manufacturers of vitamin D would be able to overcome the challenges in the near future.
- - - - - - - -

Even more growth predicted for vitamin D market - March 2010         Printer Friendly PDF this page! Follow this page for updates
This page is in the following categories (# of items in each category)
Food sources for Vitamin D 108