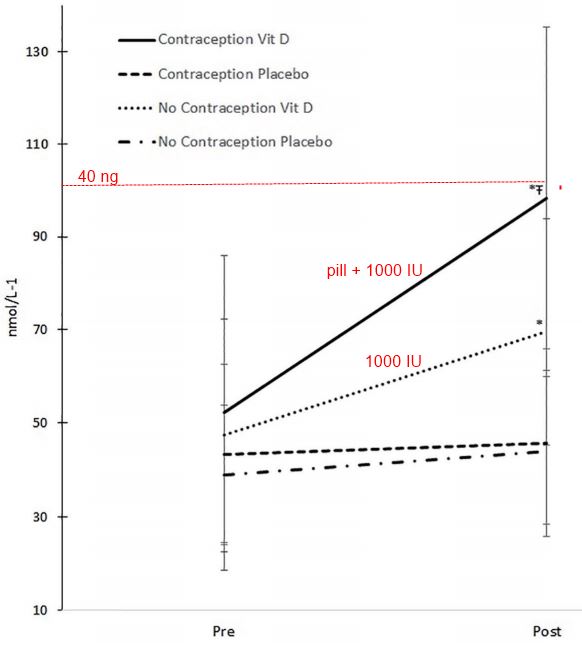 Background: A number of cross-sectional studies have highlighted a potential benefit of estrogen-containing contraception on serum 25-hydroxyvitamin D (25(OH)D) levels. The purpose of the present prospective study was to determine whether oral vitamin D3 supplementation significantly increases serum 25(OH)D more for women taking the estrogen-containing oral contraception than those not taking this medication.

Methods: Thirty-eight premenopausal adult females aged 18 - 45 years old were recruited from a university campus; exclusion criteria included those presently taking vitamin D supplementation, those who stopped or started taking oral contraception in last 6 months and those taking any other form of contraception. A prospective double-blind placebo design was implemented; the dependent variable was serum 25(OH)D and the independent variables were using or not using oral estrogen-containing contraception, and vitamin D3 or placebo supplementation. Participants were tested 4 weeks apart, and blood samples were collected using a capillary blood spot sample method and analyzed by liquid chromatography-tandem mass spectrometry. An independent technician prepared the identical supplement bottles with either 100 placebo pills or 100 active vitamin D3 pills (1,000 IU per pill) and participants randomly selected a supplement bottle.

Results: Baseline measurements of 25(OH)D were non-significantly 11% higher in those taking estrogen. ANOVA results revealed a significant two-way interaction between supplementation group (treatment vs. placebo) and treatment period (before vs. after) (P < 0.001), demonstrating a substantial rise in serum 25(OH)D for the treatment group compared with the placebo group. The results also identified a three-way interaction (P = 0.014) on serum 25(OH)D between the three independent variables, with the vitamin D oral contraception group having significantly greater serum 25(OH)D increases (from 45.9 to 98.3 nmol/L) compared with those not taking oral contraception (44.2 - 69.6 nmol/L) (P = 0.019).

Text, but not tables extracted from the PDF

Introduction
There is a high prevalence of vitamin D insufficiency and deficiency across the world [1-3] and living near the equator, with its associated exposure to sunlight, does not necessary equate to adequate serum vitamin D status [4]. Deficiency is associated with a range of medical disorders including metabolic bone disease [3, 5], type 2 diabetes [2], cancer and impaired immune function [6, 7]. It is also associated with muscle weakness, which has been linked to the increased risk of falls in the elderly [5, 8] and to impaired athletic performance [9-11].
It is therefore important to be able to accurately measure vitamin D to identify those people with deficiency. Serum 25-hydroxyvitamin D (25(OH)D) is the most stable circulating biomarker of vitamin D and is therefore measured in routine clinical practice. It exists in two major forms: 25(OH)D2 and 25(OH)D3.

The former is mainly plant-derived, whilst 25(OH) D3 is obtained mainly from sunlight exposure and diet (dairy products and fatty fish). Serum 25(OH)D3 has a higher biopotency than 25(OH)D2 and therefore food fortification or supplements are mainly given as vitamin D3 [12]. Serum 1,25-di- hydroxyvitamin D is the active form of the vitamin but this is more difficult to measure.
Serum levels of 25(OH)D are influenced by a range of factors. Palaniswamy et al [13] reported that gender, season, diet, obesity and physical activity were all associated with low 25(OH)D concentrations. A number of cross-sectional studies have reported that estrogen-containing hormonal contraception enhances serum 25(OH)D levels in women [10, 13, 14]. Harris and Dawson-Hughes [14] reported that women on contraception had 39% higher serum 25(OH)D levels compared with non-users. They also noted that five participants who ceased taking oral contraception during the following year had decreases in their 25(OH)D levels. The underlying mechanism for this is unclear at present, although there are at least two possible mechanisms: estrogen increases vitamin D 25-hydroxylase activity in the liver [15], and it causes an increased circulating concentration of vitamin D binding protein [16]. Both these mechanisms could increase 25(OH)D levels but it is still unclear whether this has a physiological effect on bone metabolism.
The previous studies have been observational in nature. The purpose of the present prospective study was to determine whether oral vitamin D3 supplementation significantly increases serum 25(OH)D more for women taking the estrogen-containing oral contraception than those not taking this medication.

Materials and Methods
Participants
Premenopausal adult females aged between 18 and 45 years old were recruited from a university campus (latitude 52.58 °N) during the month of March. Participant exclusion criteria included those presently taking vitamin D supplementation, those who stopped or started taking oral contraception in last 6 months and those taking any other form of contraception, e.g. implant. Inclusion criteria for participants taking oral contraception required a minimum of 6 months using estrogen-containing contraception. Required sample size was calculated, based upon data provided by Harris and Dawson-Hughes [14], as six participants per group (oral contraception + vit D supplementation; oral contraception + placebo; no contraception + vit D supplementation; no contraception + placebo) based upon magnitude of effect at 90% confidence intervals [17]. To account for blinded nature of the study and potential dropout, it was decided to recruit 60 participants. Fifty-eight female participants volunteered for the study and 20 dropped out (34%) during its course (Table 1).
Experimental design
A prospective double-blind placebo design was implemented. The dependent variable was serum 25(OH)D and the independent variables were using or not using oral estrogen-containing contraception, and vitamin D3 or placebo supplementation.
An independent technician prepared the identical supplement bottles with either 100 placebo pills or 100 active vitamin D3 pills (1,000 IU per pill) that had uniform appearance. Using an online random number generator (www.sealedenvelope. com), all bottles were allocated a number using a 1:1 allocation. Participants, outcome assessors, and data analysts were kept blinded to the allocation, and the independent researcher unblinded the trial post data analysis. The entire protocol was approved by a university Ethics Committee.
Protocol
Participants were tested 4 weeks apart. Recorded sunlight during this period was 124.8 h. Each participant completed informed consent before anthropometric measurements and blood collection. Standing height was measured to the nearest 0.1 cm using a Seca stadiometer (Hamburg, Germany), with the participants in bare feet and their heads in Frankfort horizontal plane. Total body mass was measured to the nearest 0.5 kg with a Seca beam balance 710 (Hamburg, Germany), and participants wore minimal clothing. Using a capillary blood spot sample method, the tester used a single use lancet on the participant’s selected finger and the first show of blood was wiped away. Four blood spots were collected on the blood collection card (City Assays, Birmingham, UK) making sure the spots were of sufficient size and had soaked through the paper. The card was then sealed before being sent to an independent laboratory for analysis (City Assays, Pathology Department Sandwell and West Birmingham Hospital NHS Trust, UK). Each participant was asked to select a number from a number grid 1-60.

The relevant supplement sample was then issued to the participant with the instructions to complete the supplementation within 3 days. Blood data collection occurred again 4 weeks later. After the study, the lead author contacted all participants to feedback their individual results and provide participants who had been on the placebo trial with vitamin D3 supplementation.
Blood analysis
A liquid chromatography-tandem mass spectrometry (LC-MS/ MS) method was applied to dried blood spot samples, utilizing blood spot calibrators. The method is standardized against conventional 25-hydroxyvitamin D3 and D2 LC-MS/MS service for serum. Blood spot results showed good comparability to serum/plasma results (r2 = 0.98; intra-assay variation < 10%; inter-assay variation < 11%). The City Assays laboratory participates in the DEQAS external quality assurance scheme.
Data analysis
A three-way repeated-measures ANOVA was used to detect changes in serum 25(OH)D due to the independent variables, either using or not using oral contraception, and vitamin D3 or placebo supplementation, before and after being given the vitamin D3 or placebo supplementation. The repeated-measures factors were: oral contraception (yes or no) and vitamin D3 supplementation (vitamin D3 or placebo) as the two between subject factors, and the treatment period (before or after being given the supplementation) as the third within-subject factor.
Results
There was no difference in the age and anthropometric measurements between the groups (Table 1). The baseline measurements of 25(OH)D were 11% higher in those taking estrogen (48.1 ± 27.33 vs. 43.5 ± 20.64 nmol/L), but this did not reach statistical significance.
The ANOVA results revealed a significant two-way interaction between supplementation group (treatment vs. placebo) and treatment period (before vs. after) (P < 0.001), demonstrating a substantial rise in serum 25(OH)D for the treatment group compared with the placebo group, following the period of supplementation (Table 2). However, the ANOVA results also identified a three-way interaction (P = 0.014) on serum 25(OH)D between the three independent variables (Fig. 1).
Clearly, the benefits of being given vitamin D can be seen in both groups (Fig. 1, as described in the two-way interaction above), but the benefit of being given vitamin D is significantly greater in those taking oral contraception compared with those not taking oral contraception (P = 0.019). The take-up of serum 25(OH)D by those taking oral contraception is over 52 nmol/L (from 45.9 to 98.3 nmol/L) compared with only 25 nmol/L (44.2 - 69.6 nmol/L) for those not on oral contraception.

The present prospective study showed that both groups on vitamin D3 supplementation increased serum 25(OH)D levels but the group that was also on estrogen-containing oral contraception reported a further 100% increase compared to those who were not taking this medication. This study supports the observations of previous cross-sectional and longitudinal observation studies that oral contraception has a positive effect on serum 25(OH)D levels [10, 14]. Our study also showed those taking the estrogen-containing oral contraceptive had 11% higher baseline 25(OH)D but this did not reach statistical significance. Studies by Harris and Dawson-Hughes [14] and Harmon et al [18] have both shown significant larger increases in 25(OH)D for those on the oral contraceptive of 20-39%__. It is difficult to provide an explanation for these differences, but all three studies demonstrate that 25(OH)D serum levels increase in response to the estrogen-containing oral contraceptive. Our study also shows that this effect is enhanced when taking high- dose vitamin D supplementation.

Future prospective studies should therefore assess whether the increase in 25(OH)D is associated with parallel changes in serum 1,25(OH)D, parathyroid hormone (PTH) and other markers of bone metabolism. Wolman et al [10] noted a significant decrease in PTH for those on oral contraception that was association with a significant increase in serum 25(OH)D above the levels reported for those not taking oral contraception. The study was limited by low numbers of participants on contraception [5] and therefore the results cannot be generalized further.
The observed vitamin D response to the estrogen-containing oral contraceptive raises the question as to whether there is a vitamin D response to other situations where there is a change in estrogen. In studies on postmenopausal women taking hormone replacement therapy (HRT), one reported a significant increase in vitamin D binding protein [19], whilst another showed no increased benefit on bone mineral content [20]. Heikkinen et al [21] reported a 38.2% increase in serum 25(OH)D for participants taking HRT and vitamin D3, but this was only a slightly greater increase than the vitamin D3 only group (33.5%). It is also possible that vitamin D levels may change in response to those going through the menarche and the menopause. Further studies are needed to address these questions.
In conclusion, the estrogen-containing oral contraception increases serum 25(OH)D in premenopausal women with a magnified effect in those taking vitamin D supplementation. Future studies need to examine the relationship between estrogen, vitamin D supplementation, serum 25(OH)D, 1,25(OH) D, PTH and other markers of bone metabolism.

Estrogen contraception pill doubled the response to 1,000 IU of vitamin D – RCT Sept 2017         Printer Friendly PDF this page! Follow this page for updates
This page is in the following categories (# of items in each category)
Women 180 Predict Vitamin D 76

Metabolic Syndrome 3.5 X more likely if both Vitamin D and Estrogen are low (...Oral contraceptive use associated with higher levels of vitamin D – thesis Ju...Oral Contraceptives (which increase Vitamin D) reduce the risk of some cancer...