The aim of this review was to summarize current progress in VD research by focusing effect of low VD level on different body systems and erectile function. Here we examine research linking VD deficiency and ED and discuss how VD influences ED and its classic risk factors-factors that also associate to increased ED risk. We also summarize research indicating that VD associates with reduced risk of several nonvascular contributing factors for ED. Available literature demonstrates relatively high rates of low VD serum levels in ED patients. Based on the preclinical and clinical data available in the literature, to date, we infer that VD play a critical role in maintaining erectile function in humans. Nevertheless, this should also be tested through randomized controlled studies on the effect of VD supplementation with larger population.
&nbspDownload the PDF from VitaminDWiki

Clipped from the PDF
One mechanism linking low VD levels with ED may be via reduced synthesis of NO. Recently Barassi et al demonstrated a higher presence of VDD in arterial ED patients compared with non-arterial-ED patients and a lower serum VD levels in more severe ED patients.[18]
Both observational and interventional studies have established the presence of an association between VD levels and ED. This relation is more than a simple relation, because there are many risk factors (Figure 2) in the etiology of ED which might be directly caused by VDD.
Vitamin D and nitric oxide production
Penis is a vascular organ, and erections have a vascular basis. NO pathway is known to mediate penile erection. NO is a physiologic signal essential for penile erection, and disorders that reduce NO synthesis or release in the erectile tissue are commonly associated with ED. Sexual stimulation releases neurotransmitters from the corpus cavernosa as well as NO from the endothelial cells of the penis.[17]
Another important mechanism of action of VD seems to be via NO- mediated vascular dilation. NO synthases are a family of enzymes that catalyze the production of NO from L -arginine. Activated VD stimulates the production of substantial quantities of NOS and NO in macrophages produced in bone and in endothelial cells in response to tuberculosis. NO is vital to vascular dilation and thereby important for the inhibition of ED.[17] Because of the presence of VD and VDR in the endothelial cells and the pivotal role of NO and eNOS in the endothelial activity, it is conceivable that an interaction between VD and NO is capable of influencing vascular function.[51] Molinari et al.[51] demonstrated that VD is able to stimulate NO production in human umbilical vein endothelial cells through eNOS activation. The finding of an involvement of VD in NO production by endothelial cells is quite relevant. NO is an essential molecule and serves multiple functions including vasodilatation and many anti-atherogenic properties. Indeed, dysregulation of eNOS activity is thought to contribute to the pathogenesis of certain vascular diseases such as atherosclerosis and hypertension.
Activated VD stimulates the production of NO in endothelial cells and NO synthases which catalyze the production of NO from L-arginine[51], is a key to vascular dilation and thereby critical for the prevention of ED. Interestingly, the latter study showed that VD response occurs within seconds and, for this reason, it appears that VD has a non-genomic direct effect on endothelial cells. Recently, Andrukhova et al.[52] reported that VD receptor mutant mice are characterized by lower bioavailability of the vasodilator NO due to reduced expression of the key NO synthesizing enzyme i.e. eNOS. Reduction in eNOS ends with endothelial dysfunction, increased arterial stiffness, increased aortic impedance, structural remodeling of the aorta, and impaired systolic and diastolic heart function at advanced ages, independent of changes in the renin-angiotensin system.[52] The latter group demonstrated that VD is a direct transcriptional regulator of eNOS.[52] This may also clarify why endothelium derived, and NO-evoked dilation is reduced nearly 50% in arteries from VD deficient male rats.[16] Under the light of recent scientific researches, unsurprisingly, there exists a higher prevalence of ED among VD deficient patients compared to those with optimal levels.[9]

Aim: To evaluate the status of serum vitamin D in a group of patients with ED.

Methods: Diagnosis and severity of ED was based on the IIEF-5 and its aetiology was classified as *arteriogenic (A-ED),

with penile-echo-color-Doppler in basal condition and after intracaversous injection of prostaglandin E1. Serum vitamin D and intact PTH concentrations were measured.

Main Outcome Measures: Vitamin D levels of men with A-ED were compared with those of male with BL-ED and NA-ED.

Conclusion
Our study shows that a significant proportion of ED patients have a vitamin D deficiency and that this condition is more frequent in patients with the arteriogenic etiology. Low levels of vitamin D might increase the ED risk by promoting endothelial dysfunction. Men with ED should be analyzed for vitamin D levels and particularly to A-ED patients with a low level a vitamin D supplementation is suggested. 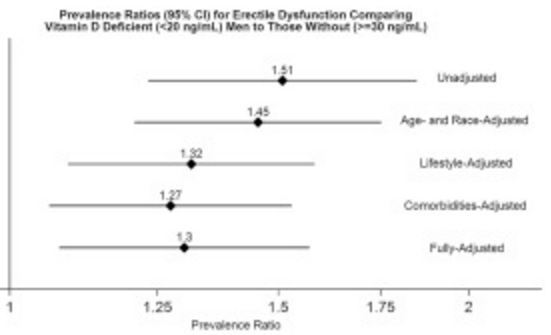 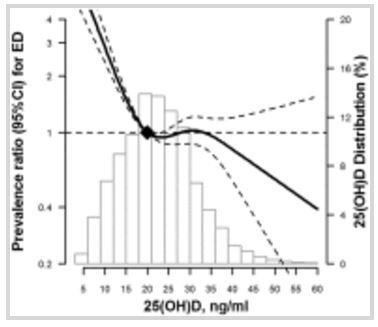 Background and aims: Erectile dysfunction (ED) and atherosclerotic cardiovascular disease (ASCVD) share many common risk factors, and vascular ED is a marker for increased ASCVD risk. Low 25-hydroxyvitamin D 25(OH)D concentrations have been associated with increased ASCVD risk, but less is known regarding the relationship of low 25(OH)D with ED. We determined whether 25(OH)D deficiency is associated with ED independent of ASCVD risk factors.

Methods: We performed cross-sectional analyses of 3390 men aged ≥20 years free of ASCVD who participated in NHANES 2001–2004. Serum 25(OH)D was measured by the DiaSorin radioimmunoassay; deficiency was defined as levels <20 ng/ml (<50 nmol/L). Self-reported ED, assessed by a single validated question, was defined as men who reported being “never” or “sometimes able” to maintain an erection. We assessed the relationship between 25(OH)D deficiency and ED prevalence using adjusted Poisson regression methods.

Conclusion: In this cross-sectional analysis of a representative sample of U.S. men, vitamin D deficiency was associated with an increased prevalence of ED independent of ASCVD risk factors. Additional research is needed to evaluate whether treating vitamin D deficiency improves erectile function.

Wonder: Is Vitamin D similar or better than Viagra?

ED and depression are both associated with Low Vitamin D, but so what - Jan 2019

Erectile Dysfunction associated with low vitamin D in several studies         Printer Friendly PDF this page! Follow this page for updates
This page is in the following categories (# of items in each category)
Fertility and sperm 110 Top news 826