Epstein-Barr virus infection in the development of neurological disorders - 2020

Epstein-Barr Virus (EBV) is a ubiquitous human herpesvirus that contributes to the etiology of diverse human cancers and auto-immune diseases. EBV establishes a relatively benign, long-term latent infection in over 90 percent of the adult population. Yet, it also increases risk for certain cancers and auto-immune disorders depending on complex viral, host, and environmental factors that are only partly understood. EBV latent infection is found predominantly in memory B cells, but the natural infection cycle and pathological aberrations enable EBV to infect numerous other cell types, including
oral, nasopharyngeal, and gastric epithelia, B-, T-, and NK-lymphoid cells, myocytes, adipocytes, astrocytes, and neurons.
EBV infected cells, free virus, and gene products can also be found in the CNS. In addition to the direct effects of EBV on infected cells and tissue, the effect of chronic EBV infection on the immune system is also thought to contribute to pathogenesis, especially auto-immune disease. Here, we review properties of EBV infection that may shed light on its potential pathogenic role in neurological disorders.
&nbspDownload the PDF from VitaminDWiki 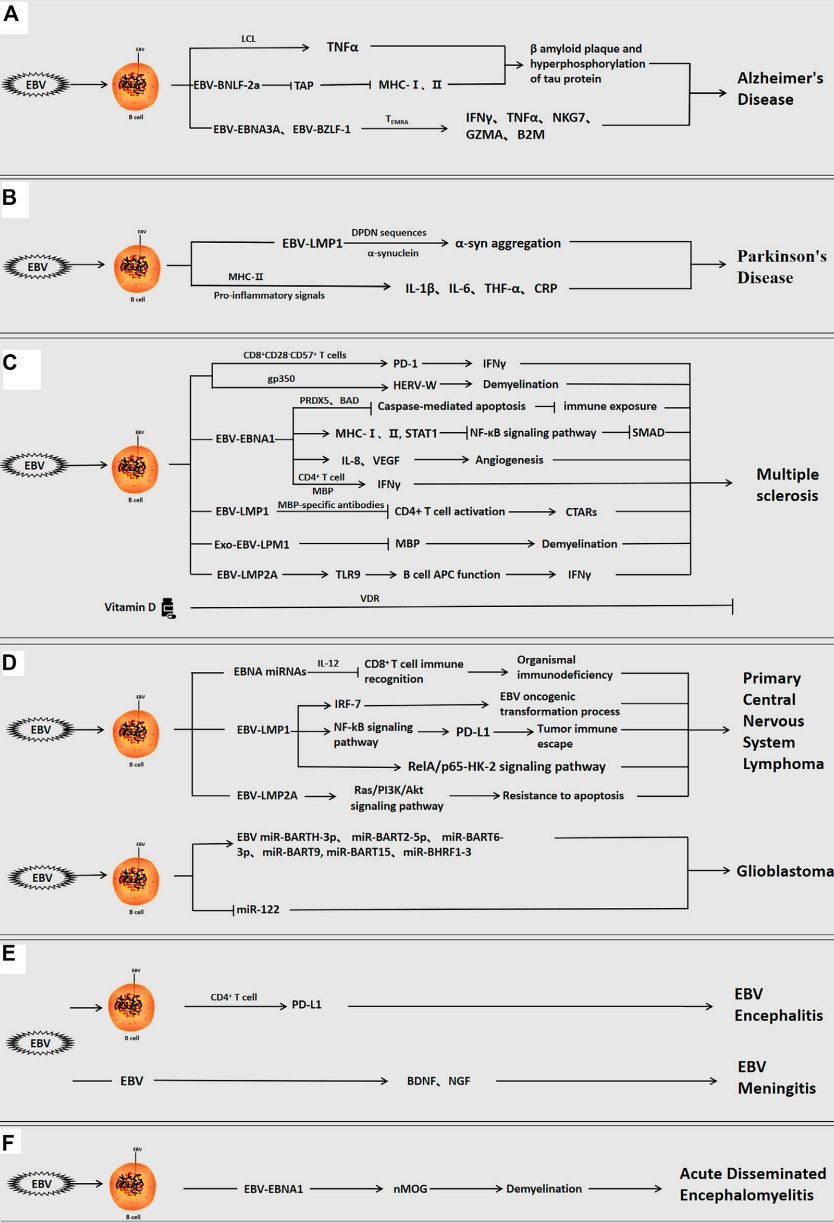 Epstein-Barr virus (EBV), also known as human herpesvirus 4, is a double-stranded DNA virus that is ubiquitous in 90–95% of the population as a gamma herpesvirus. It exists in two main states, latent infection and lytic replication, each encoding viral proteins with different functions. Human B-lymphocytes and epithelial cells are EBV-susceptible host cells. EBV latently infects B cells and nasopharyngeal epithelial cells throughout life in most immunologically active individuals. EBV-infected cells, free viruses, their gene products, and abnormally elevated EBV titers are observed in the cerebrospinal fluid. Studies have shown that EBV can infect neurons directly or indirectly via infected B-lymphocytes, induce neuroinflammation and demyelination, promote the proliferation, degeneration, and necrosis of glial cells, promote proliferative disorders of B- and T-lymphocytes, and contribute to the occurrence and development of nervous system diseases, such as Alzheimer’s disease, Parkinson’s disease, multiple sclerosis, acute cerebellar ataxia, meningitis, acute disseminated encephalomyelitis, and brain tumors. However, the specific underlying molecular mechanisms are unclear. In this paper, we review the mechanisms underlying the role of EBV in the development of central nervous system diseases, which could bebeneficial in providing new research ideas and potential clinical therapeutic targets for neurological diseases.
&nbspDownload the PDF from VitaminDWiki

Title change made March 2022 caused the visitor count to reset.
There have actually been 2219 visitors to this page since it was originally made
Epstein-Barr Virus increases the risk of many health problems – many studies         (Cached) Printer Friendly Follow this page for updates
This page is in the following categories (# of items in each category)
Virus 1173

Infectious Mononucleosis (virus) and Vitamin D - many studiesFatigue and other long-haul problems appear to be associated with low Magnesi...