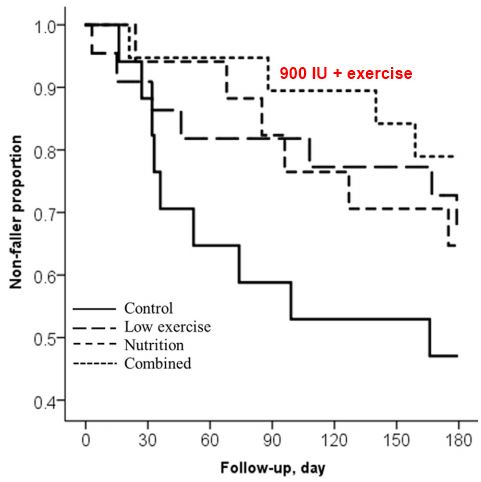 Background
Falls are a serious problem among frail elderly and their prevention is an important health concern. We compared the frequency of falls among institutionalized frail elderly residents following different interventions: low-frequency exercise, vitamin D supplementation, and a combination of both.

Results
A two-way analysis of variance including interactions between experimental group and time indicated a clear benefit in the groups that received supplementation with vitamin D. A Cox proportional-hazard regression analysis, adjusted for sex and age, showed that compared to the control group, the combined group had a reduced risk of falls (hazard ratio: 0.28, 95% CI: 0.08–0.92, P < 0.05). The other groups did not significantly differ from controls.

Conclusion
The intervention combining low-frequency exercise and vitamin D supplementation was effective for the reduction of falls among institutionalized frail elderly individuals.

Elderly falls reduced 3.6 times by 900 IU of vitamin D and simple exercise – RCT Nov 2016         Printer Friendly PDF this page! Follow this page for updates
This page is in the following categories (# of items in each category)
Intervention 757 Falls and Fractures 230

400 IU of Vitamin D is too little and annual is too infrequent to prevent fal...Elderly with low vitamin D fall more often (Parkinson’s in this case) – Aug 2019Falls not decreased by 800 IU daily of vitamin D (proven again) – Dec 2016Falls reduced by a third if achieved 40 ng level vitamin D– RCT Sept 2018Hip fracture recovery best with home exercise plus Vitamin D – RCT Dec 2018One pill every two weeks gives you all the vitamin D most adults needRisk of death after bone fracture was 6.6 X higher if less than 10 ng of vita...