Items in both categories Vitamin D Receptor and Cancer - Colon:

Items in both categories Vitamin D Receptor and  Cancer

Items in both categories Vitamin D Receptor and Cancer - other: 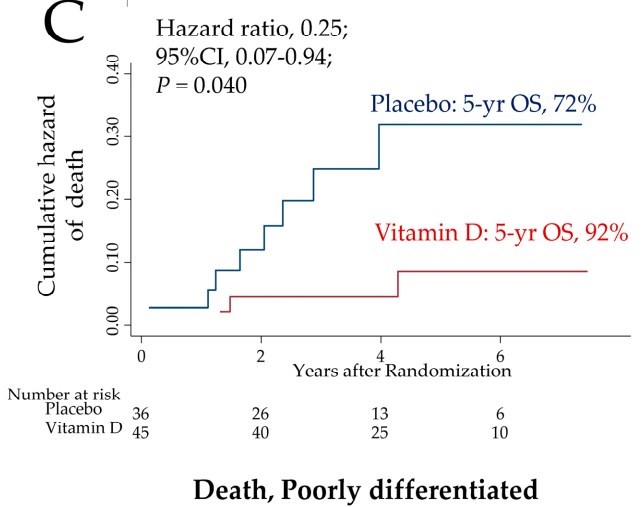 Some coauthors of this study previously performed the AMATERASU randomized, double-blind, placebo-controlled trial of postoperative oral vitamin D supplementation (2,000 IU/day) in 417 patients with stage I to III digestive tract cancer from the esophagus to the rectum who underwent curative surgery (UMIN000001977).
We conducted a post-hoc analysis of the AMATERASU trial to explore the effects of modification of vitamin D supplementation by histopathological characteristics on survival. Among patients with poorly differentiated adenocarcinoma, the 5-year relapse-free survival rate of patients supplemented with vitamin D was 91% compared with 63% in the placebo group (hazard ratio [HR], 0.25; 95% confidence interval [CI], 0.08 to 0.78; P = 0.017; P for interaction = 0.023).
Similarly, the 5-year overall survival rate was 92% in the vitamin D group compared with 72% in the placebo group (HR, 0.25; 95%CI, 0.07 to 0.94; P = 0.040; P for interaction = 0.012).
In contrast, there were no significant effects in other histopathological characteristics between vitamin D and placebo groups. These findings generated the hypothesis that oral vitamin D supplementation may improve both relapse-free survival and overall survival in a subgroup of patients with poorly differentiated adenocarcinoma.

Digestive track Cancer (poorly differentiated) death 4X less likely if 2,000 IU of vitamin D – RCT Oct 2019         Printer Friendly PDF this page! Follow this page for updates
This page is in the following categories (# of items in each category)
Cancer - Other 56