A negative feedback loop of H19/miR-675/EGR1 is involved in diabetic nephropathy by downregulating the expression of the vitamin D receptor.

Items in both categories Diabetes and VDR are listed here:

At last, a mechanism to relate diabetes to reduced tissue Vitamin D 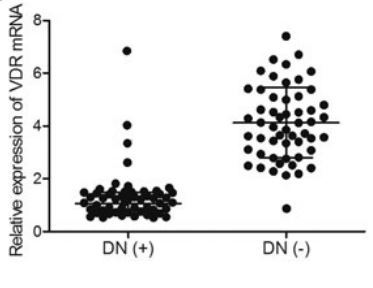 AIM:
We aimed to explore the regulatory relationship among the long noncoding RNA H19, micorRNA-675 (miR-675), the vitamin D (VD) receptor (VDR), and the early growth response protein 1 (EGR1) in the pathogenesis of diabetic nephropathy (DN) among patients with diabetes mellitus (DM).

METHODS:
Expression levels of H19, miR-675, VDR, and EGR in patients or CIHP-1/HEK 293 cells were measured via quantitative reverse-transcription polymerase chain reaction and western blot analysis. Computational analysis and luciferase assays were performed to determine EGR1 as a target gene of miR-675.

RESULTS:
The relative expression of miR-675 was higher in the presence of H19, whereas the expression of both VDR and EGR1 messenger RNA was decreased in the presence of H19 or miR-675. However, relative expression of H19 and miR-675 was increased, whereas VDR expression was suppressed upon the treatment of 1,25-dihydroxyvitamin D3 or EGR1. VDR was identified as a target gene of miR-675. The H19 promoter and EGR1 increased the luciferase activity of cells transfected with wild-type VDR. Compared with DM patients free of DN, the levels of H19 and miR-675 were increased in the DN(+) group, whereas the levels of VDR and EGR1 were decreased.