Diabetes is associated with low vitamin D in various races, but not blacks – Sept 2015

Risk of diabetes (from NHANES surveys) 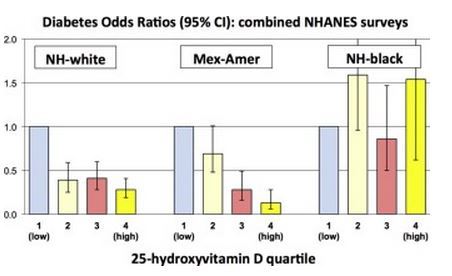 The articles in Diabetes and Darker Skin are here:

Highlights
• Vitamin D status not associated with diabetes in blacks, but is in non-blacks.
• Confirms previous results from earlier US surveys.
• Consistency suggests this is unlikely due to chance.
•Suggests a covariate maybe modifying association between vitamin D and diabetes.
•Covariate maybe absent or reduced in non-Hispanic blacks.

Diabetes is associated with low vitamin D in various races, but not blacks – Sept 2015         Printer Friendly Follow this page for updates
This page is in the following categories (# of items in each category)
Skin - Dark 386 Diabetes 473