13+ VitaminDWiki pages with DENGUE in title

Dengue is a mosquito-borne flaviviral serious febrile illness, most common in the tropical and subtropical regions including Pakistan. Vitamin D is a strong immunomodulator affecting both the innate and adaptive immune responses and plays a pivotal role in pathogen-defense mechanisms. There has been considerable interest in the possible role of vitamin D in dengue viral (DENV) infection. In the present prospective cross-sectional study, we assessed a possible association between serum vitamin D deficiency (VDD) and susceptibility towards severe dengue fever (DF) illness. Serum vitamin D levels were measured at the time of hospitalization in 97 patients diagnosed with dengue fever (DF), dengue hemorrhagic fever (DHF) or dengue shock syndrome (DSS) at Mayo Hospital, King Edward Medical University, Lahore, PK, from 16 November 2021 to 15 January 2022. In terms of disease severity, 37 (38.1%) patients were DF, 52 (53.6%) were DHF grade 1 and 2, and 8 (8.2%) were DSS. The results revealed that most patients (75 (77.3%)) were vitamin-D-deficient (i.e., serum level &lt; 20 ng/mL), including 27 (73.0%) in DF, 41 (78.8%) in DHF grade 1 and 2, and 7 (87.5%) in DSS. The degree of VDD was somewhat higher in DSS patients as compared to DF and DHF grade 1 and 2 patients. Overall, serum vitamin D levels ranged from 4.2 to 109.7 ng/mL, and the median (IQR) was in the VDD range, i.e., 12.2 (9.1, 17.8) ng/mL. Our results suggest that there may be a possible association between VDD and susceptibility towards severe dengue illness. Hence, maintaining sufficient vitamin D levels in the body either through diet or supplementation may help provide adequate immune protection against severe dengue fever illness. Further research is warranted
&nbspDownload the PDF from VitaminDWiki 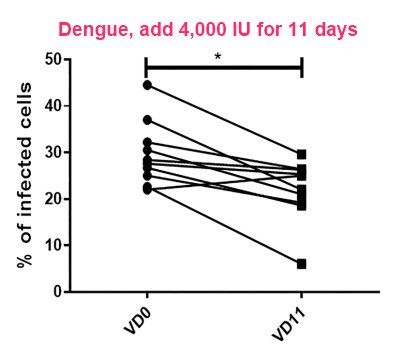 Dengue, caused by dengue virus (DENV) infection, is a public health problem worldwide. Although DENV pathogenesis has not yet been fully elucidated, the inflammatory response is a hallmark feature in severe DENV infection. Although vitamin D (vitD) can promote the innate immune response against virus infection, no studies have evaluated the effects of vitD on DENV infection, dendritic cells (DCs), and inflammatory response regulation. This study aimed to assess the impact of oral vitD supplementation on DENV-2 infection, Toll-like receptor (TLR) expression, and both pro- and anti-inflammatory cytokine production in monocyte-derived DCs (MDDCs). To accomplish this, 20 healthy donors were randomly divided into two groups and received either 1000 or 4000 international units (IU)/day of vitD for 10 days. During pre- and post-vitD supplementation, peripheral blood samples were taken to obtain MDDCs, which were challenged with DENV-2. We found that MDDCs from donors who received 4000 IU/day of vitD were less susceptible to DENV-2 infection than MDDCs from donors who received 1000 IU/day of vitD. Moreover, these cells showed decreased mRNA expression of TLR3, 7, and 9; downregulation of IL-12/IL-8 production; and increased IL-10 secretion in response to DENV-2 infection. In conclusion, the administration of 4000 IU/day of vitD decreased DENV-2 infection. Our findings support a possible role of vitD in improving the innate immune response against DENV. However, further studies are necessary to determine the role of vitD on DENV replication and its innate immune response modulation in MDDCs.
&nbspDownload the PDF from Sci-Hub via VitaminDWiki

Wikipedia Viral Infections (most are prevented/treated by Vitamin D) 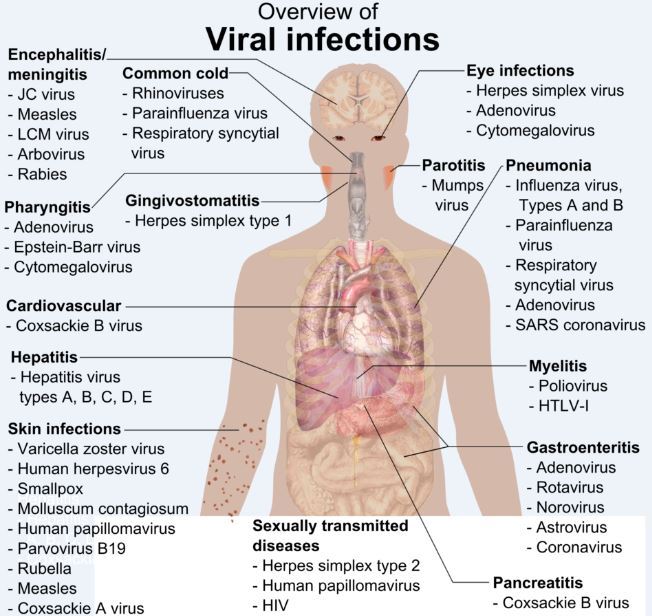 Methods and materials: The study was conducted in the Virology Laboratory, Department of Microbiology, Maulana Azad Medical College, New Delhi. We studied 100 cases (suspected dengue patients) and 100 healthy controls over a period of 1 year (January 2014 to December 2014). Revised WHO guidelines (2009) were followed to define and characterize a case of dengue. Peripheral venous samples were collected for diagnosis of dengue (NS1 antigen, IgM and IgG antibody). Genomic DNA was extracted from patients and healthy controls and Restriction Fragment Length Polymorphism was done for detection of VDRL gene polymorphism (start codon rs2228570 and 3′ UTR, rs7975232). Data was analysed using SPSS software (version 17.0). A p value < 0.05 was considered statistically significant.

Conclusion: A significant association of T allele of rs 2228570 polymorphism was found in severe dengue cases in the study. The results also suggest that C/C genotype of rs 7975232 was associated with reduced risk of developing symptomatic dengue.
&nbspDownload the abstract PDF via VitaminDWiki

Infections with the mosquito-transmitted dengue virus (DENV) are a pressing public health problem in many parts of the world. The recently released commercial vaccine for DENV has encountered some problems, and there is still no effective drug to treat infections. Vitamin D has a well characterized role in calcium and phosphorus homeostasis, but additionally has a role in the immune response to bacterial and viral pathogens. In this study a number of fused bicyclic derivatives of 1H-pyrrolo1,2imidazol-1-one with vitamin D receptor (VDR) agonist activity were evaluated for possible anti-DENV activity. The results showed that five of the compounds were able to significantly inhibit DENV infection. The most effective compound, ZD-3, had an EC50 value of 7.47 μM and a selective index of 52.75. The compounds were only effective when used as a post-infection treatment and treatment significantly reduced levels of infection, virus output, DENV protein expression and genome copy number. These results suggest that these VDR agonists have the potential for future development as effective anti-DENV agents.
&nbspDownload the PDF from VitaminDWiki
.