A Randomized Study of a Single Dose of Intramuscular Cholecalciferol in Critically Ill Adults. 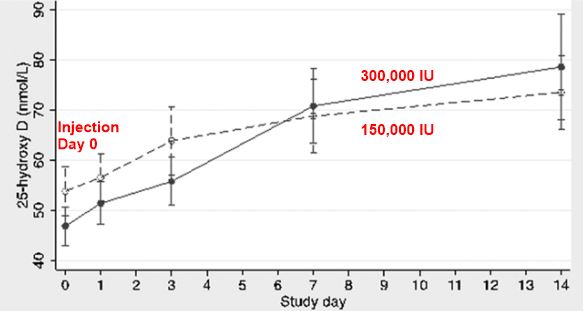 MEASUREMENTS AND MAIN RESULTS: Pharmacokinetic, pharmacodynamic parameters, and outcome measures were collected over a 14-day period or until ICU discharge, whichever was earlier. Prior to randomization, 28 of 50 patients (56%) were classified as vitamin D deficient. By day 7 after randomization, 15 of 23 (65%) and 14 of 21 patients (67%) normalized vitamin D levels with 0.15 and 0.3 mU, respectively (p = 0.01) and by day 14, 8 of 10 (80%) and 10 of 12 patients (83%) (p = 0.004), respectively. Secondary hyperparathyroidism was manifested in 28% of patients at baseline. Parathyroid hormone levels decreased over the study period with patients achieving vitamin D sufficiency at day 7 having significantly lower parathyroid hormone levels (p < 0.01). Inflammatory markers (C-reactive protein and interleukin-6) fell significantly over the study period. Greater increments in 25-hydroxy-vitamin-D were significantly associated with greater increments in cathelicidin at days 1 and 3 (p = 0.04 and 0.004, respectively).
Although in-hospital mortality rate did not differ between the groups, patients who did not mount a parathyroid hormone response to vitamin D deficiency had a higher mortality (35% vs 12%; p = 0.05). No significant adverse effects were observed.

Publisher charges for the PDF

&nbspAvailable for free via ResearchGate

Critically ill injected with 300,000 IU of vitamin D, 3X more likely to die if PTH did not respond - RCT July 2015         Printer Friendly PDF this page! Follow this page for updates
This page is in the following categories (# of items in each category)
Trauma and surgery 308 Thyroid and parathyroid 78