And, more importantly, people now need 5X more vitamin D
Food can be fortified, but Vitamin D home fortification- don't wait 100 years for your govt to do it
Germany does not fortify ANY food with vitamin D, is considering 1000 IU from bread – Nov 2013
Reasons for Vitamin D deficiency 35+ reasons 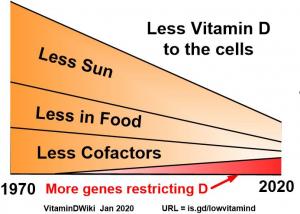 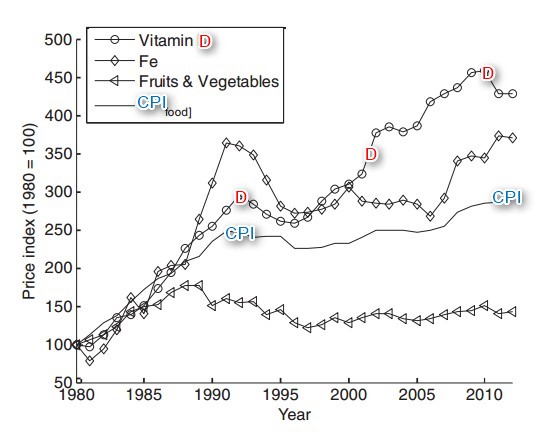 BACKGROUND:
Health-related illnesses such as obesity and diabetes continue to increase, particularly in groups of low socioeconomic status.
The increasing cost of nutritious food has been suggested as an explanation.

OBJECTIVE:
To construct a price index describing the cost of a diet adhering to nutritional recommendations for a rational and knowledgeable consumer and, furthermore, to investigate which nutrients have become more expensive to obtain over time.

METHODS:
Linear programming and goal programming were used to calculate two optimal and nutritious diets for each year in the interval under different assumptions. The first model describes the rational choice of a cost-minimizing consumer; the second, the choice of a consumer trying to deviate as little as possible from average consumption. Shadow price analysis was used to investigate how nutrients contribute to the diet cost.

CONCLUSIONS:
Not adhering to recommendations (especially those for vitamin D) offers an opportunity for consumers to lower the diet cost. However, the cost of nutritious diets has not increased more than the cost of food in general between 1980 and 2012 in Sweden.

Cost of getting 400 IU of vitamin D from food has risen much faster than CPI – April 2015         Printer Friendly PDF this page! Follow this page for updates
This page is in the following categories (# of items in each category)
How much Vitamin D 334 Food sources for Vitamin D 108 Fortification with Vitamin D 112