Circulating levels of vitamin D and colorectal adenoma: A case-control study and a meta-analysis. 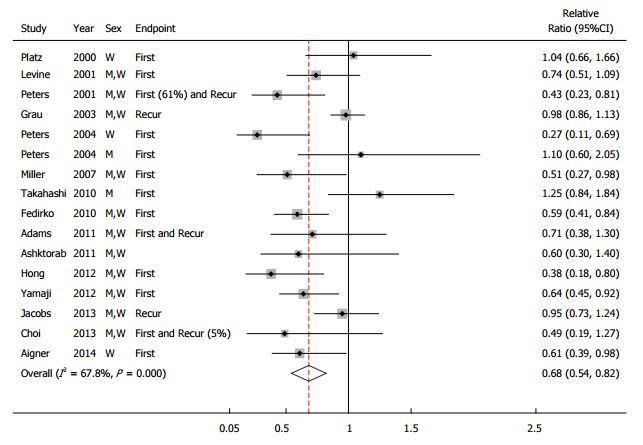 AIM:
To examine the association between circulating 25-hydroxyvitamin D [25(OH)D] levels and colorectal adenoma in a case-control study and a meta-analysis.

METHODS:
We conducted a matched case-control study (112 cases and 112 matched controls) and combined 15 studies, including our study, in a meta-analysis. The study-specific odds ratios (ORs) and 95% confidence intervals (CIs) were pooled using a random-effects model. In total, 5454 colorectal adenomas and 6656 controls were included in the meta-analysis.

RESULTS:
In a meta-analysis including 14 previous studies and our study, we observed a significant inverse association between circulating 25(OH)D levels and colorectal adenoma (OR = 0.68; 95%CI: 0.54-0.82) when comparing the highest category with the lowest category. Stratification by adenoma location (proximal or distal adenoma) showed similar estimates. When we stratified by study region, the ORs (95%CIs) were 0.70 (0.52-0.88) in the US and 0.66 (0.34-0.97) in Asia.

CONCLUSION:
These data suggest an inverse association between circulating 25(OH)D levels and colorectal adenoma in both Western and Asian populations.

PMID: 26269676
&nbspDownload the PDF from VitaminDWiki

Colon cancer 30 percent more likely if low vitamin D – 12th meta-analysis Aug 2015         Printer Friendly PDF this page! Follow this page for updates
This page is in the following categories (# of items in each category)
Cancer - Colon 119 Meta-analysis of Vitamin D 502