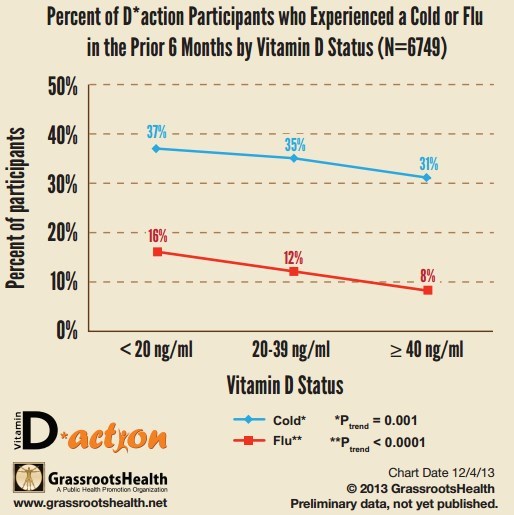 The Easiest Way to Prevent Colds and Flu

From http://www.huffingtonpost.com/bill-gottlieb/the-easiest-way-to-preven_b_651576.html
America has a nasty cold.

Collectively, we cough, sniffle and sneeze our way through one billion colds a year, spending 1.5 billion dollars for doctor visits and 2 billion dollars on non-prescription cough and cold treatments. Fortunately, few people die of a cold. But you can't say that about the flu.

Is there any way to make yourself less vulnerable to these two infections?

Yes, says a study published on June 14, 2010 in the open-access online medical journal Plos One. Make absolutely certain you have higher-than-normal blood levels of vitamin D.

Here's what you need to know about the study and its practical application.

The study was led by James R. Sabetta, MD, in the Department of Medicine at Yale University School of Medicine and the Section of Infectious Diseases at Greenwich Hospital in Greenwich, Connecticut. He and his colleagues observed the obvious: rates of "acute respiratory tract infections" (colds and flu) rise in the fall and winter. But why? Could the seasonal drop in blood levels of vitamin D — a hormone-like nutrient produced most abundantly in the body when the skin is exposed to the strong, direct sunlight of summer — explain the phenomena?

To find out, the researchers took monthly measurements of the blood levels of vitamin D (25-hydroxyvitamin D) in 195 healthy adults. The measurements started the third week in September and continued for the next four to five months. At the same time, the study participants were asked to report any acute respiratory tract infections. The results were, well, decisive.

Those who had blood levels lower than 38 ng/ml (nanograms per milliliter) had twice as many upper respiratory tract infections.

Among the 18 people in the study who consistently maintained blood levels of vitamin D above 38 ng/ml, 15 were completely free of upper respiratory tract infections — no colds, no flu! (Of those 18 folks, 13 were taking vitamin D supplements. More about that in a minute.)

Of the other 180 participants — all of them with blood vitamin D levels consistently below 38 ng/ml — 81 developed colds and flu.

The study's statistical summary: the 38 plus group had a two-fold decrease in the risk of developing a cold or flu.

Other Research
The Yale researchers aren't the first to link vitamin D levels and the flu. In research reported in the American Journal of Clinical Nutrition in March, 2010, Japanese doctors studied 334 children, half of whom took 1200 IU of vitamin D daily. Eighteen of the children taking vitamin D developed the flu, compared to 31 children not taking the vitamin, a risk reduction of 58 percent. An earlier study in the Archives of Internal Medicine looked at 19,000 adults and adolescents and found that those with the lowest blood levels of vitamin D were 40 percent more likely to have had a recent cold or flu, compared to those with the highest levels. In another study, women taking 2,000 IU of vitamin D (to protect bones) had an average of nine episodes of colds and flu over three years of taking the supplement — compared to an average of 30 episodes in a group of women taking 200 IU of vitamin D.

But the Yale study was the first to methodically track vitamin D levels and colds/flu incidence during the cold/flu season. What did the Yale researchers have to say about their startling results?

"Maintenance of a 25-hydroxyvitamin D serum concentration of 38 ng/ml or higher should significantly reduce the incidence of acute viral respiratory infections and the burden of illness caused thereby, at least during the fall and winter." Easier said than done.

A deficiency of vitamin D is incredibly common, says James Cannell, MD, president of the Vitamin D Council (www.vitaminDcouncil.com) and co-author of the paper "Epidemic Influenza and Vitamin D," published in the Journal of Epidemiology and Health. In fact, your risk of a deficiency of vitamin D is 50 percent — one out of every two Americans is likely to have blood levels below 20 ng/ml, he says.

In fact, Dr. Cannell is convinced that a low blood level of vitamin D is the reason people are vulnerable to cold and flu viruses. "Vitamin D dramatically increases the production of the body's own antimicrobial peptides," he told me, for the "Cold and Flu" chapter of my most recent book, Speed Healing (Bottom Line Books). "If you have sufficiently high blood levels of vitamin D, you'll have enough of those peptides to kill cold and flu viruses before they have a chance to penetrate the mucosal barrier."

Here are Dr. Cannell's recommendations for making sure your blood levels of vitamin D stay high throughout the year.

There's only one way to know for sure if your levels are high enough — get a blood test. But you don't have to go to a doctor to do it. The ZRT Laboratory (www.zrtlab.com) provides a reliable in-home vitamin D blood test, says Dr. Cannell. He recommends a test every six months.

Maintain blood levels of between fifty to eight ng/ml. While 38 ng/ml was generally protective in the Yale study, Dr. Cannell says research shows this higher level is necessary for vitamin D to be stored in muscles and fat and most effectively do its preventive work. And that's a lot of work. Studies over the past few years show vitamin D can prevent (and often treat) cancer, heart disease, type 2 diabetes, osteoporosis, obesity, depression, asthma, multiple sclerosis, ulcerative colitis, and many other conditions. In fact, high levels of Vitamin D have been linked to a reduction of death from any cause. (The nutrient has such a wide-ranging effect, says Dr. Cannell, because it targets more than 2,000 genes — 10 percent of the human genome.)

Take a vitamin D supplement. Dr. Cannell recommends 5,000 IU a day. (To get that amount from D-fortified milk, you'd need to drink 50 glasses a day, he points out.) "Anyone who takes this amount regularly shouldn't get a cold or flu," he told me. "If you do get one, it should be mild." He also recommends taking vitamin D3 (cholecalciferol), not vitamin D2 (ergocalciferol), its synthetic analog. "Vitamin D3 is the compound your skin makes naturally when you go in the sun, and it's more potent and safer than vitamin D2." And don't worry about an overdose, says Dr. Cannell. "There is not a single case in the medical literature of vitamin D toxicity while taking regular doses of 25,000 IU or less," he says. (The ideal vitamin D supplement includes co-factors like magnesium and zinc, says Dr. Cannell, and he has formulated his own brand, from Purity Products (www.purity.com): Dr. Cannell's Vitamin D.)

Zinc prevents colds and is also in every Vitamin D Receptor

My 102 year-old father-in-law and I used UVC air cleaners to kill any bacteria in our rooms.
Got the UVC idea from hospitals. UVC seem to help a lot.
There are a variety of UVC air cleaners with HEPA filters on Amazon for less than $100.
They seem to stop the spread of cold bacteria
Update 2019
Have been using 3 UVC air cleaners for 3+ years to stop a cold within a few hours Amazon $35
Along with Zinc and Vitamin D

Type of infection vs time of the year 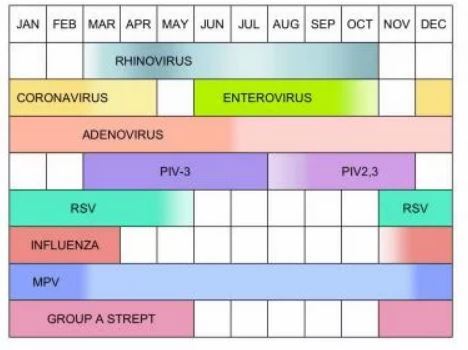 What if we just made sure the air was clean in schools? Fast Company
Increase in test scores was equal to that of adding 1/15 of a teacher to each class
The annual cost of the air filter per classroom + public area $1300/year
The annual cost of the teacher (without benefits, retirement, etc?) $55,000/year
So the air filter was about 1/3 the cost to produce the same benefit
&nbspDownload the non-peer reviewed PDF from VitaminDWiki
Study does not indicate, but the founder of VitaminDWiki suspects the benefits are due to reduced respiratory infections, air polution

Printer Friendly PDF this page! Follow this page for updates
This page is in the following categories (# of items in each category)
Breathing 364 Overviews 76 Virus 179
Edit Comments Files 3