Items in BOTH of the categories Cognition and Stroke: 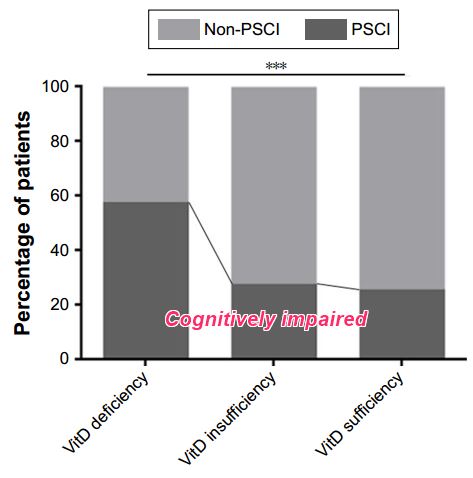 OBJECTIVE:
Previous studies found that low vitamin D levels were modestly associated with risk of stroke and poor functional outcome after stroke. In addition, vitamin D deficiency has been linked with cognitive decline. Our study aimed to explore the potential relationship between vitamin D levels in the short-term acute phase of ischemic stroke and cognitive impairment at 1 month.

METHODS:
In total, 354 ischemic stroke patients were consecutively enrolled in the study and received 1-month follow-up. The serum levels of vitamin D were measured within 24 hours after admission. Cognitive function was evaluated by the Mini-Mental State Examination (MMSE) at 1 month after acute ischemic stroke. Cognitive impairment was defined according to different education levels.

CONCLUSION:
Independent of established risk factors, vitamin D deficiency in the short-term phase of ischemic stroke was associated with a higher incidence of 1-month cognitive impairment.

Printer Friendly PDF this page! Follow this page for updates
This page is in the following categories (# of items in each category)
Cognitive 282 Stroke 89
Edit Files 2