Serum levels of 25-hydroxyvitamin D and survival in Norwegian patients with cancer of breast, colon, lung, and lymphoma: a population-based study.

PURPOSE:
We investigated the association between serum levels of 25-hydroxyvitamin D (25-OHD) and risk of death in Norwegian cancer patients.

METHODS:
The study population was 658 patients with cancers of the breast (n = 251), colon (n = 52), lung (n = 210), and lymphoma (n = 145), obtained from JANUS, a population-based serum bank in Norway. Serum samples were collected within 90 days of cancer diagnosis and were analyzed for 25-OHD. Patients were diagnosed during 1984-2004 and were followed for death throughout 2008. We used Cox regression models to assess the relationship between serum 25-OHD and risk of death.

RESULTS:
Three hundred and ninety-nine patients died during follow-up, of whom 343 (86%) died from cancer. Adjusted for sex, age at diagnosis, and season of blood sampling, patients with 25-OHD levels below 46 nmol/L at diagnosis experienced shorter survival. Compared to patients in the lowest quartile of serum 25-OHD, the risk of cancer death among patients in the highest quartile was significantly reduced (HR 0.36 95% CI 0.27, 0.51). The estimated change in risk of cancer death was most pronounced between the first and the second quartile. The associations between 25-OHD levels and survival were observed for all four cancers.

CONCLUSIONS:
Higher circulating serum levels of 25-OHD were positively associated with the survival for cancers of the breast, colon, lung, and lymphoma. 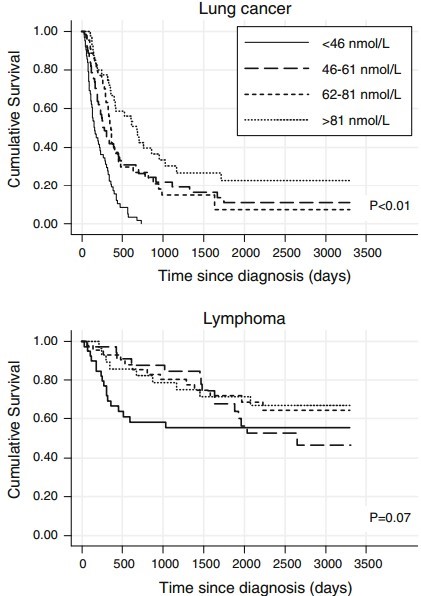 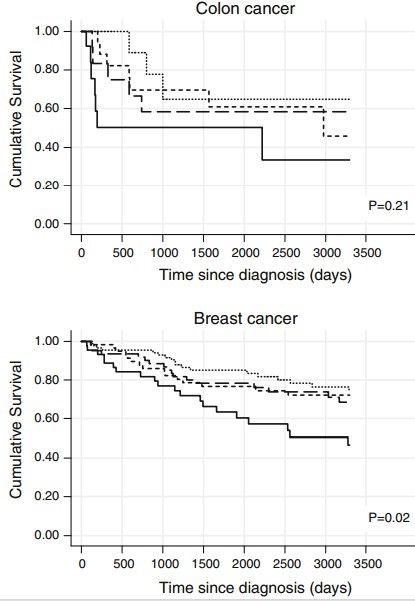 
Table 5 Hazard ratio (HR) and all cause death

Lymphoid Cancer – 2.9 X more likely to die if low vitamin D – March 2018Vitamin D review of Colorectal, Breast, and Prostate Cancers – May 2016Is low vitamin D a cause or an affect of an illness, how and when will we kno...