Association between vitamin D level and hematuria from a dipstick test in a large scale population based study: Korean National Health and nutrition examination survey 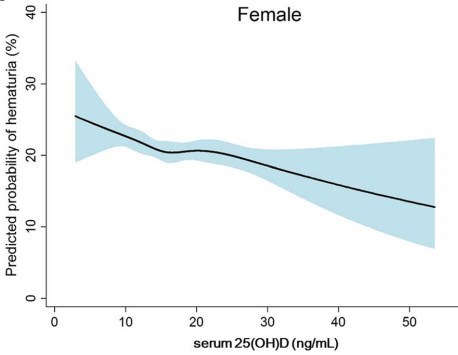 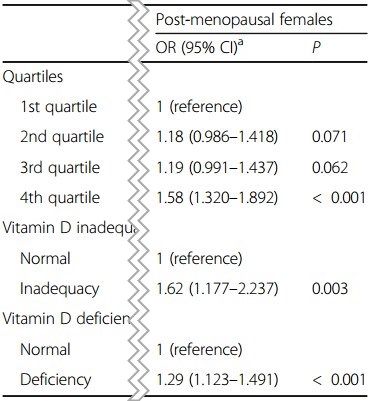 Background
Vitamin D deficiency is an important health concern because it is related to several comorbidities and mortality. However, its relationship with the risk of hematuria remains undetermined in the general population. In this study, we analyzed the association between vitamin D deficiency and hematuria.

Methods
We conducted cross-sectional analysis using data of participants from the Korean National Health and Nutrition Examination Survey (KNHANES) 2010–2014. A total of 20,240 participants, aged ≥18 years old, were analyzed. Serum 25-hydroxyvitamin D (25(OH)D) levels were measured in a central laboratory and hematuria was defined as ≥1+ on a dipstick test. Multivariate logistic regression was conducted to calculate the odds ratio (OR) of hematuria risk according to serum 25(OH)D quartiles, after adjusting several covariates.

Blood in urine of postmenopausal women 1.6X more likely if low vitamin D – May 2019         Printer Friendly PDF this page! Follow this page for updates
This page is in the following categories (# of items in each category)
Women 144