Using Plasma Vitamin D Concentration as a Surrogate Marker to Predict Drug Response: A New Chapter in the Management of Inflammatory Bowel Disease and Beyond? editorial

Paradigms for the management of inflammatory bowel disease (IBD) have continued to evolve, yet the treatment response, especially for patients with moderate to severe disease, remains difficult to predict. Although the introduction of biologic agents, such as tumor necrosis factor alpha (TNFa) antagonists (eg, adalimumab, certolizumab, infliximab) and a4-integrin inhibitors (natalizumab and vedolizumab), has improved overall treatment outcome, clinical remission rate remains highly variable, ranging from 40% to 80%.1-6 In this issue of JPEN, the results from the cohort study by Zator and his colleagues showed that the pretreatment plasma vitamin D concentration may be an important marker in predicting the treatment outcomes of anti-TNFa therapy in patients with IBD.7 Specifically, using a baseline vitamin D concentration of 30 ng/mL as the cutoff, the investigators found that patients who were vitamin D deficient before treatment were more likely to experience early discontinuation of anti-TNFa therapy (hazard ratio [HR], 2.13; 95% confidence interval [CI], 1.03-4.39; P = .04). The results remained consistent after exclusion of patients who received concurrent systemic corticosteroid such as prednisone (HR, 2.80; 95% CI, 1.02-7.71). More important, the primary reason (72% of the cases) for early discontinuation of therapy was lack of efficacy, suggesting that pretreatment vitamin D deficiency is associated with suboptimal response to drug therapy.

It has long been suspected that vitamin D status may play a role in the pathogenesis and progression of IBD. Experimental models with the deletion of vitamin D receptor (VDR) were found to be more susceptible to develop colitis, to be less likely to recover from intestinal mucosal injury, and to experience worse prognosis compared with models that express VDR.8,9 In addition, a number of studies link vitamin D status and various aspects of IBD, ranging from the severity of illness to the development of long-term complications in patients.10-13 Vitamin D also appears to work in synergy with corticoste-roids, a relationship best demonstrated in childhood asthma.14 Steroid requirements and in vitro steroid responsiveness are significantly inversely associated with vitamin D status.15 Vitamin D enhances steroid-induced interleukin-10 secretion and MAPK phosphatase 1 expression to produce increased anti-inflammatory effects. Vitamin D also suppresses inflammation by enhancing both corticosteroid inhibition of proinflammatory chemokines such as RANTES (regulated upon activation normal T-cell expressed and secreted) and cor-ticosteroid induction of a tolerogenic dendritic cell pheno-type.16 But the current study by Zator et al is the first to specifically show the link between vitamin D status and anti-TNFa therapy. The finding of this study are supported by previously published papers demonstrating that vitamin D modulates the TNF-mediated proinflammatory pathway.17-20 What remains unclear is whether vitamin D independently decreases inflammatory response by suppressing TNF expression or works synergistically with anti-TNF agents through other mechanisms.

This study also may have opened a new chapter in the understanding of drug-nutrient interaction. Our existing knowledge leads us to think that the primary reason for us to monitor nutrient status with certain drug therapy is to prevent adverse events. For instance, we supplement a patient with pyridoxine during the course of therapy for tuberculosis with isoniazid to prevent neuropathy; we monitor plasma vitamin D concentrations in patients receiving enzyme-inducing antiepileptic agents such as phenytoin and carbamazepine because of the pharmacokinetic interactions through enzyme induction. But we have not seen any previous example where the treatment efficacy of a drug can be substantially augmented by targeting the plasma concentration of a micronutrient to a specific threshold. If the results are confirmed in future studies, this would likely be the most notable example of a drug-nutrient interaction showing that a micronutrient status can be used as a surrogate marker to predict the outcomes of pharmacotherapy.

Clearly, despite the potential of these results, they are of a pilot nature and must be validated and replicated with larger scale trials. A few important aspects that were not the aims of Zator's study should be addressed in future investigations.

In summary, unlike many other association studies between vitamin D and a disease state, the study by Zator and his colleagues is of significant potential because it may open a new chapter in targeted drug therapy for IBD and possibly other illnesses such as rheumatoid arthritis and multiple sclerosis. Nevertheless, it also raises many important questions that must be answered adequately before this approach becomes a real game changer. 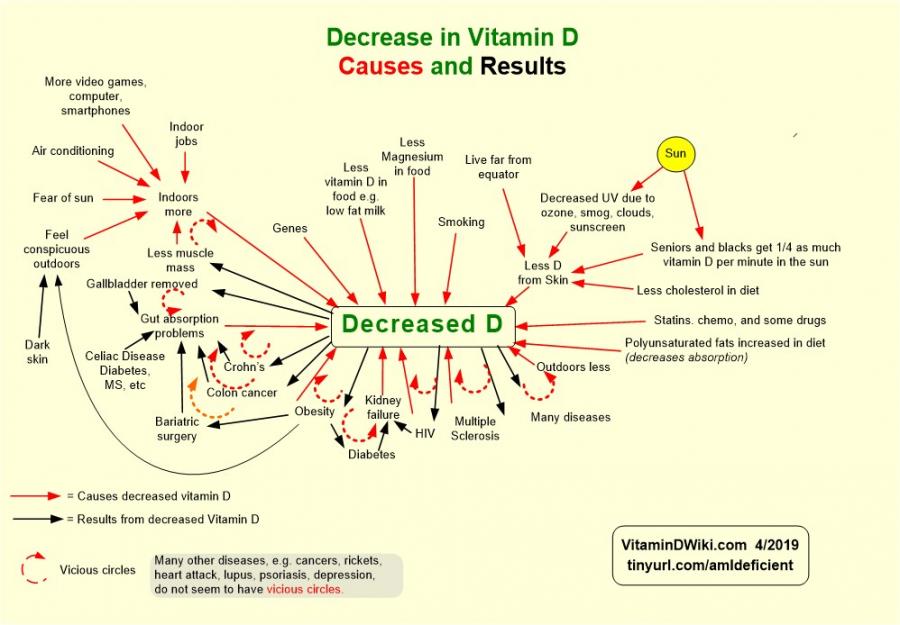 Better response to Inflammatory Bowel Disease drug if more than 30 ng of vitamin D – March 2014         Printer Friendly PDF this page! Follow this page for updates
This page is in the following categories (# of items in each category)
Interactions with Vitamin D 106 Gut 180