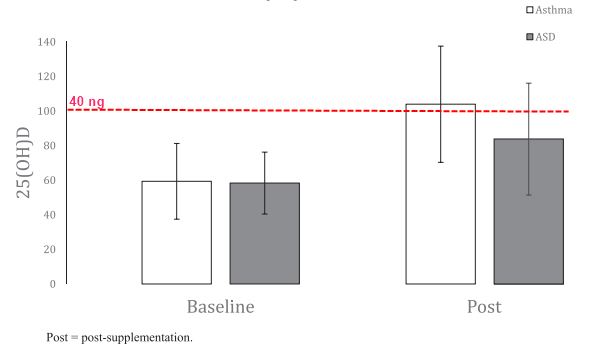 CONCLUSIONS: Despite similar demographics, children with ASD had a lower increase in 25(OH)D levels with supplementation. Potential mechanisms include altered absorption/metabolism as well as well genetic factors. Clinical and research work relating to vitamin D is ASD should measure 25(OHO)D response to supplementation to assess therapeutic doses.

Title was revised Oct 2019 which caused the visitor count to reset.
There have actually been 1987 visitors to this page since it was originally made

Autistics have half of the response to Vitamin D (perhaps poor genes) – RCT Oct 2018         Printer Friendly PDF this page! Follow this page for updates
This page is in the following categories (# of items in each category)
How much Vitamin D 335 Autism 136 Intervention 688 Predict Vitamin D 65