Asthma damage might be prevented by Vitamin D – April 2014 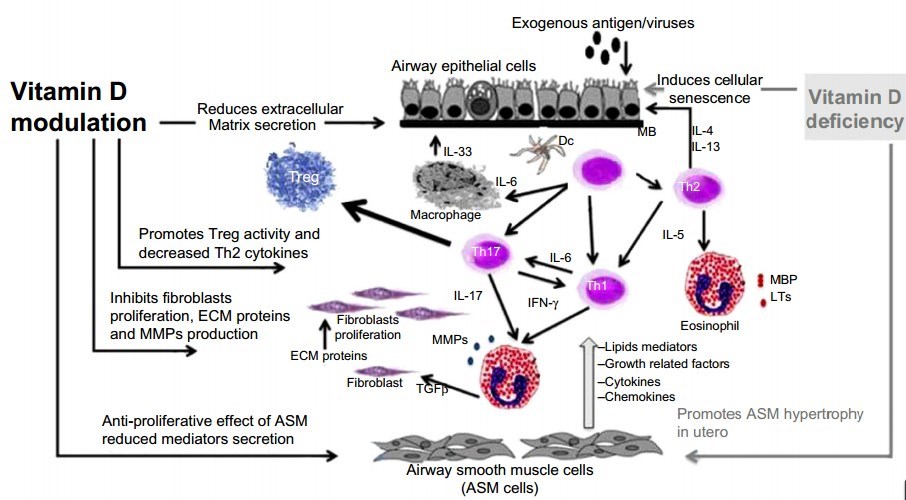 Remodeling is an early event in asthma described as a consequence of production of mediators and growth factors by inflammatory and resident bronchial cells. Consequently, lung function is altered, with a decrease in forced expiratory volume in one second and exacerbated airway hyperresponsiveness. Subepithelial fibrosis and airway smooth muscle cell hypertrophy are typical features of structural changes in the airways. In animal models, vitamin D deficiency enhances inflammation and bronchial anomalies. In severe asthma of childhood, major remodeling is observed in patients with low vitamin D levels. Conversely, the antifibrotic and antiproliferative effects of vitamin D in smooth muscle cells have been described in several experiments. In this review, we briefly summarize the current knowledge regarding the relationship between vitamin D and asthma, and focus on its effect on airway remodeling and its potential therapeutic impact for asthma.

As shown in this review, airway remodeling involves structural changes in the walls of the airways induced by repeated injury and repair processes, and is characterized by changes in tissue, cellular, and molecular composition affecting the ASM, epithelium, blood vessels, extracellular matrix, and defective lung-blood barriers. Airway remodeling is an early event in asthma and other lung diseases, and is arguably one of the most intractable problems leading to irreversible loss of lung function. Vitamin D may influence airway remodeling by affecting the growth and contractility of ASM and inhibiting TGF-p1 and MMPs, as well as fibro-blast proliferation, promoting antimicrobial pathways, and suppressing Treg activity, as summarized in Figure 1.

Our knowledge regarding direct mechanistic links between vitamin D and lung disease is limited. In view of the available data, vitamin D insufficiency can be said to be associated with the severity of childhood asthma and airway remodeling. According to experimental evidence, several pathways involve hypovitaminosis D in remodeling, ie, development of alterations in the lung and accelerated cellular senescence associated with an unbalanced process of repair, with excessive Th2 inflammation, fibroblast activation, and smooth muscle cell hypertrophy, suggesting a beneficial therapeutic impact of supplementation on reversal of remodeling. However, major evidence supporting the beneficial effect of vitamin D supplementation on remodeling is needed. Vitamin D supplementation does inhibit several profibrotic mediators and production of growth factors in vitro, but the results of clinical trials are still controversial. The issue lies within the link of causality between vitamin D insufficiency and asthma. Although vitamin D is definitely necessary for pulmonary health, the low levels observed in asthma could be due to the inflammatory process and simply considered as a marker of severity. Recommendations cannot be made regarding vitamin D in asthma until the results of ongoing clinical trials become available.

Asthma damage might be prevented by Vitamin D – April 2014         Printer Friendly PDF this page! Follow this page for updates
This page is in the following categories (# of items in each category)
Breathing 401