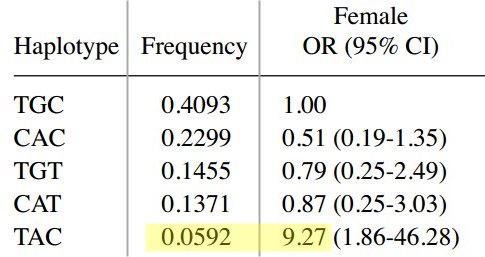 Note: 4X increase for men
Vitamin D receptor (VDR) gene single nucleotide polymorphisms (SNPs) have been investigated over the past years with the aim of identifying any association with the development of Alzheimer's disease (AD). However, information regarding the potential association of VDR SNP haplotypes with AD is limited. The aim of the present study was to provide additional knowledge on the effects of VDR haplotypes on the development of late-onset AD in a cohort of Southeastern European Caucasians (SECs). The study sample included 78 patients with late-onset AD and 103 healthy subjects as the control group. VDR SNPs that were analyzed were TaqI (rs731236), BsmI (rs1544410) and FokI (rs2228570).

The TaqI and BsmI polymorphisms were in high linkage disequilibrium (D'=0.9717, r=0.8467) and produced a haplotype with a statistically significant different frequency between the control and AD group.

On the whole, the present study demonstrates that in the SEC population, TAC and TA are risk haplotypes for AD, while the CAC haplotype may act protectively. SEC women carrying the TAC or TA haplotype are at a greater risk of developing AD, thus suggesting that women are markedly affected by the poor utilization of vitamin D induced by the VDR haplotype.
&nbspDownload the PDF from VitaminDWiki

Alzheimer's genes: Are you at risk? Mayo Clinic

Note: Some diseases, such as COVID and Breast Cancer, actively decrease activation of the VDR

I am unaware of any hint that Alzheimer's decreases VDR activation
There may, however, be an increase in Alzheimer's due to Long-COVID