Chronic kidney disease (CKD) is characterized by accelerated vascular calcification, which may in part be caused by deficiency of the anti-aging factor Klotho. Lau et al. demonstrate that administration of active vitamin D and its analog decreases aortic calcification in association with increases in two potent calcification inhibitors—the secreted form of Klotho and vascular osteopontin. These data might provide a new perspective on the association of active vitamin D with improved survival in patients with CKD.

Vascular calcification is one of the major complications of chronic kidney disease (CKD) and contributes to an increased risk of cardiovascular morbidity and mortality in this population. Emerging evidence suggests that vascular calcification is not just a passive process of mineral precipitation but a pathobiological process that shares many features with skeletal osteogenesis and involves various calcification inducers and inhibitors.1 Recently, epidemiological studies of CKD patients demonstrated a significant survival benefit associated with the use of active vitamin D — the mainstream therapy for secondary hyperparathyroidism —independently of the traditional effects on mineral metabolism.2 A plausible explanation for these findings is provided by experimental studies showing several nonclassical actions of vitamin D, including effects on the immune and inflammatory system, the renin–angiotensin system, and cell growth and differentiation. In addition, recent data suggest that a physiological dose of active vitamin D may have protective effects against vascular calcification, although a supraphysiological dose of active vitamin D induces massive vascular calcification in experimental uremia.3

Klotho, originally identified as an anti-aging factor, is a 130-kDa single-pass transmembrane protein that is predominantly expressed in the kidney, parathyroid gland, and choroid plexus.4 Klotho functions as an obligate cofactor for fibroblast growth factor-23 (FGF23) and mediates the effects of FGF23 to induce urinary phosphate excretion, suppress renal production of 1,25-dihydroxyvitamin D, and inhibit synthesis and secretion of parathyroid hormone.5 The extracellular domain of Klotho can be secreted into blood, urine, and cerebrospinal fluid and functions as a humoral factor. Recent experimental data showed that secreted Klotho enhances calcium reabsorption in the distal tubule, promotes phosphaturia in the proximal tubule,6 and inhibits phosphate uptake by vascular smooth muscle cells.7 Interestingly, systemic expression of Klotho is decreased in humans and animals with CKD, and it is suggested that Klotho deficiency may contribute to development of vascular calcification as well as resistance to FGF23 in the kidney and parathyroid gland in CKD.5 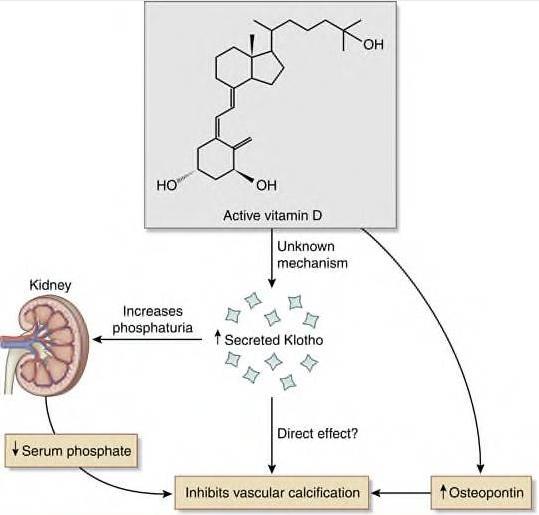 Although the results of the study by Lau et al.8 might provide a new perspective on the association of active vitamin D with improved survival in patients with CKD,2 their data should be interpreted with caution. First, the administration of calcitriol or paricalcitol resulted in paradoxical reductions in serum phosphate and FGF23 and no effects on serum calcium and parathyroid hormone. Perhaps these findings may in part be explained by the high dietary phosphate content used in the study, which might have overcome the inhibitory effect of active vitamin D on parathyroid hormone secretion and the potent phosphaturic action of secreted Klotho that was increased by active vitamin D. As the investigators acknowledge, this experimental model might be reasonable for examining the effect of active vitamin D on secreted Klotho and vascular calcification independently of changes in serum calcium and parathyroid hormone. However, since the observed changes are largely different from those in patients with CKD, additional studies are required to determine whether the results of this animal study are true of patients with CKD in the real world.

Second, it remains unclear how the secreted form of Klotho in blood and urine was increased by active vitamin D. To elucidate this mechanism, the investigators analyzed systemic expression of Klotho in detail. However, they found that Klotho expression in the kidney was not upregulated by active vitamin D in their experimental model, in contrast to previous studies.9 Similarly, no upregulation of Klotho expression was observed in other organs, including the parathyroid, in mice treated with active vitamin D. These data raise the possibility that the increased secreted Klotho following administration of active vitamin D may be caused by accelerated shedding of Klotho without changes in membrane-bound Klotho expression, although the source of secreted Klotho and the mechanism of regulation of Klotho cleavage are largely unknown. A recent study of hemodialysis patients has shown that treatment with cinacalcet hydrochloride resulted in only small and transient reductions in serum secreted Klotho despite significant alterations in mineral and bone metabolism.10 Future studies should investigate the mechanism by which shedding of membrane-bound Klotho is regulated and the involvement of active vitamin D in this process.

References are in PDF attached to the bottom of this page

- FACT: Kidney is one of the 2 ways that vitamin D is turned into something that body can use; active vitamin D = Calcitriol
- FACT: When the Kidney has problems, there is less Calcitriol available in the body
- FACT: When the Kidney has problems, there is increased death due to many factors - many of which are associated with lack of Calcitriol
- FACT: There are many on-going intervention clinical trials trying to determine how much of what kind of vitamin D is needed to correct the problem
- FACT: Vitamin D intervention has not yet been proven to help health of people with kidney problems - with random controlled trials
- FACT: Taking extra Vitamin D, in various forms, does not cause health problems - even for those with poor kidneys
- Suggestion: Increase vitamin D getting into body now - and increase co-factors so that the vitamin D can be better used

Active vitamin D treats Chronic Kidney Disease by stimulating Klotho production – Dec 2012         Printer Friendly PDF this page! Follow this page for updates
This page is in the following categories (# of items in each category)
Kidney 200