Design: Fifty two healthy subjects had their serum albumin, creatinine, calcium, alkaline phosphatase, 25 OH vitamin D (25OH D) and ntact PTH estimated at baseline, two and five months of supplementation. They were supplemented with Cholecalciferol 9572 IU/day and elemental calcium 1 gm/day. At the end of the 2nd month, those who attained vitamin D sufficiency were supplemented Cholecalciferol 3000 IU/day, and those still did not attain vitamin D sufficiency with Cholecalciferol 5286 IU/day along with 1 gm elemental calcium and the later were reassessed after three months.

Results: The mean ± SD of serum calcium, phosphorous, alkaline phosphatase were in the normal range at baseline, 2 and 5 months of supplementation (P= NS). The baseline median (IQR-Interquartile range) of 25 OHD and PTH was 6 (4-11) ng/ml and 19.6 (33-62) pg/ml respectively. At 2nd month there was threefold increase in 25 OHD levels 19.6 (14.6-28.75) ng/ml and further 50% increase at 5th month of supplementation. PTH levels were suppressed by 38 % at 2nd month and remained stable at 5th month. At end of 5th month, 46% had attained vitamin D sufficiency and 27% of subjects were still vitamin D insufficient.

Conclusions: Vitamin D supplementation based on recent ESCPG even up to upper tolerable intake levels (UL) along with elemental calcium of 1gm/day is safe and does not lead to hypercalcemia.

Vitamin D is synthesized in adequate amounts on casual exposure of skin to sunlight to a radiation waveband 290 - 315 nm in most humans [1,2]. The UVB photons are absorbed by the epidermal 7-dehydrocholesterol e(7-DHC) (provitamin D) which is rapidly converted to cholecalciferol (previtamin D3) by a temperature dependent process. This previtamin D3 enters into the circulation bound to vitamin D binding protein (DBP). Previtamin D3 is converted into 25 hydroxy vitamin D (25 OH D) in the liver which is biologically inert and requires hydroxylation in the kidney on carbon 1 by the enzyme 1 hydroxylase. The biologically active form of vitamin D is responsible for regulation of calcium and phosphate metabolism and is essential for maintaining bone health from infant to adult health. Vitamin D2 is from the dietary sources. Vitamin D2 and D3 (D represents D2 and D3) are fat soluble vitamins incorporated into chylomicrons and absorbed into the lymphatics. Serum 25 OH D levels are reliable indicator of vitamin D status of an individual. The optimal level of 25OH D to maintain skeletal health and maximal dietary absorption of calcium in the gut is accepted to be 30 ng/ml and is defined as vitamin D sufficiency [36]. A value of <20 ng/ml is defined as vitamin D deficiency and values between 20 to 30 ng/ml is defined as vitamin D insufficiency.
Indian subcontinent is situated between latitude 37.6°N and 8.4°N with plentiful sunlight throughout the year. Despite this fact, several studies from India have documented widespread prevalence of hypovitaminosis D across the length and breadth of the country in all age groups [7]. Studies in South India have shown that rural agricultural laborers' who have their torso exposed to sunlight for more than 5-6 hours during their agricultural profession have also hypovitaminosis D of varying degree [8,9]. Increased urbanization, avoidance of sunlight, clothing practices, and greater atmospheric pollution may aggravate this problem [10]. While severe vitamin D deficiency may present with radiological features of rickets/osteomalacia, subclinical vitamin D deficiency or insufficiency may have adverse consequences on the bone because of secondary hyperparathyroidism. Adequate supplementation with vitamin D may increase the bone mass and decrease the risk of fractures [11,12].
The optimal amount of vitamin D required for treatment of vitamin D has been a matter of debate until the recent publication of Endocrine Society Clinical Practice Guidelines (ESCPG) [13]. The ESCPG suggests that all adults who are vitamin D deficient be treated with 50,000 IU of vitamin D2 or vitamin D3 once a week for 8 week or its equivalent of6000 IU of vitamin D2 or vitamin D3 daily to achieve a blood level of 25(OH) D above 30 ng/ml, followed by maintenance therapy of 1500-2000 IU/day. The upper tolerable limit of 10,000 IU/day for children and adults 19 yr and older may be needed to correct vitamin D deficiency. In India one study used 60,000 IU of Cholecalciferol once a month (2000 IU/day) and later 120,000 IU per month (4000 IU/day) for three months without calcium supplementation [14]. This study concluded that monthly administration of 60,000 IU of cholecalciferol in healthy subjects with hypovitaminosis D may be sufficient in summer months but higher doses are required in winter months to maintain 25(OH) D levels in normal range. Another study has used 60,000 IU/week along with oral calcium supplementation 1 gram per day which also contains Cholecalciferol 500 IU/day (totaling to a dose of Cholecalciferol of 8642 IU/day) for a period of eight weeks [15]. Though this study has shown a loading dose of vitamin D raises the 25OH D levels to normal range the effect is not sustained over a period of one year [15]. The recent clinical practice guidelines by the endocrine society [13] give us the guidance to treat "Vitamin D deficiency" and the amount of supplementation dose required to maintain adequate vitamin D levels. We report our experience in a group of subjects with vitamin D deficiency treated based on recent endocrine society guidelines.

Fifty two consecutive subjects were recruited for the study. Most of them were asymptomatic volunteers; attenders of patients who accompanied them for other illnesses. None of them had clinical signs or symptoms of overt metabolic bone disease such as bone pains, myopathy or fractures.
Exclusion criteria included history of renal, liver, dermatological diseases, known cases of hypocalcemia or hyperparathyroidism, pregnant and lactating women, history of drug ingestion (steroids, antiepileptic drugs and rifampicin) and those with vitamin D intoxication and granulomatous diseases.
Study design and conduct
The study was conducted from July to November in 2011. All patients were given cholecalciferol supplementation administered orally 60,000 IU (1500 ug) (Calcirol, Cadila Pharmaceuticals) per week [equivalent to Cholecalciferol 8,572 IU/day; (214 ug/day)] along with supplementation of calcium tablets twice a day [each tablet contains 1,250 mg of calcium carbonate equivalent to elemental calcium of 500 mg along with Cholecalciferol 500 IU (12.5 |ig)] ("Shelcal - HD" Elder pharmaceuticals) for eight weeks. In total, these patients received Cholecalciferol of 9572 IU/day (239 uig/day) [8572 from the sachets (calculated from the weekly dosage of Cholecalciferol) and 1000 IU/ day via the calcium tablets along with 1 gm of elemental calcium] as "supplementation therapy" (Figure 1). The tolerable upper intake level (UL) of Cholecalciferol given by Endocrine Society Clinical Practice Guidelines of is 10,000 IU/ day for adults who are vitamin D deficient for a period of eight weeks [13].

Statistical analysis was performed with a statistical software SPSS (Version 11.5). Results are expressed as mean ± standard error of mean (SEM). Group means at different intervals of time of supplementation were compared using parametric (paired students t test) tests. ANOVA followed by Bonferroni correction test was used to compare various indices at three different intervals. With respect to 25 OHD and intact PTH variables because of the wide dispersion median and interquartile range (IQR) is calculated. For these two parameters to compare the changes in therapy with different intervals of time nonparametric test (Wilcoxon-signed ranks sign test) was used. P value of <0.05 was considered significant.

The mean age of the study group was 48 ± 15 years (17 men and 35 women). The baseline biochemical and hormonal parameters are shown in Table 1.
All 52 subjects recruited for the study, returned for follow up at the end of two months of vitamin D supplementation therapy. The results at the end of 2nd and 5th month of supplementation were as follows (Figure 2):

There are limitations in the study with respect to number of subjects studied and duration of the study. In a country like of India financial constraints are to screen, evaluate and follow up (mainly cost of investigation and medicines). More studies with larger number from different parts of India might help arrive at consensus especially with respect to duration of therapy and the need for second supplementation for non responders. Still this short duration study of five to six months gives us an idea of supplementations and problems one is likely to face in supplementation of vitamin D in a country like India.
Acknowledgement
CVH designed the study, followed up the patients, did analysis of data, involved in writing the manuscript, LA did the laboratory analysis and was in involved in writing the manuscript, BAN and SJ co ordinate in follow up of the patients and interacting with them. There is no conflict of interest among the authors.

VitaminDWiki suspects that this study failed to wait weeks after dosing before taking testing the vitamin D serum levels.
The serum levels take at least 3 days to rise after a big dose.
Dose ==> Response example in the following chart 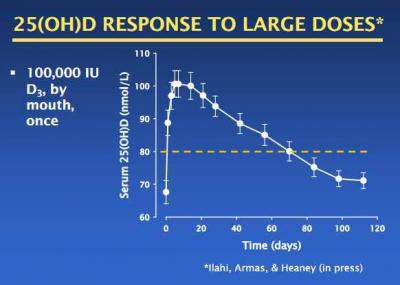 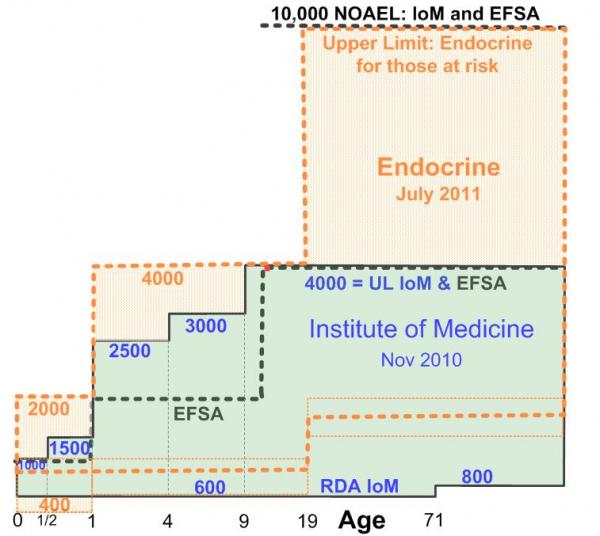 60,000 IU vitamin D weekly with daily Calcium was safe but not enough in the winter – 2012         Printer Friendly PDF this page! Follow this page for updates
This page is in the following categories (# of items in each category)
How much Vitamin D 334

60,000 IU dose of VItamin D (weekly, monthly) is popular in IndiaHighlights of Vitamin D WikiIncreased visibility for VitaminDWiki pagesMost read pages on VitaminDWikiVitamin D sachets in India – fewer than a third had the stated amount – Nov 2013