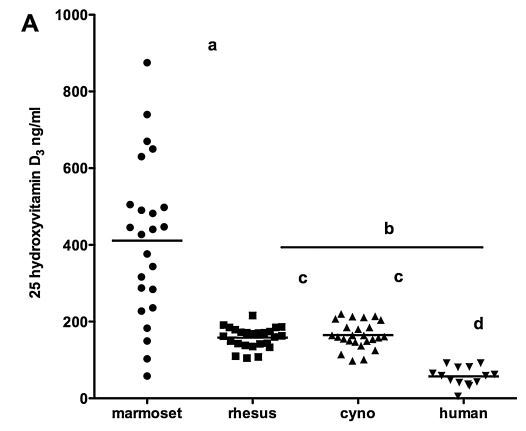 and compare them to humans using the same technique.
The nonhuman primates showed blood levels for 25(OH)D3 and 1,25(OH)2D3 significantly higher than human values with marmosets having the highest levels. Marmoset samples showed significantly more variability among individuals than those from macaques for both metabolites, but all three nonhuman primate species exhibited large variation within species for both 25(OH)D2&3 and 1,25(OH)2D2&3. Marmoset females had significantly lower values than the males for 25(OH)D3, while rhesus males showed a significant decrease in 25(OH)D3 with age.

The most striking finding is the variation within species for vitamin D levels even in laboratory primates that have a controlled diet, UV exposure, and in some cases, genetic constraints.
Similar variation in 25(OH)D responses to a fixed dose of oral vitamin D supplementation has been reported in humans.
We suggest that these species can provide primate models for examining the factors influencing variation in the levels of vitamin D necessary for human and nonhuman primate health. 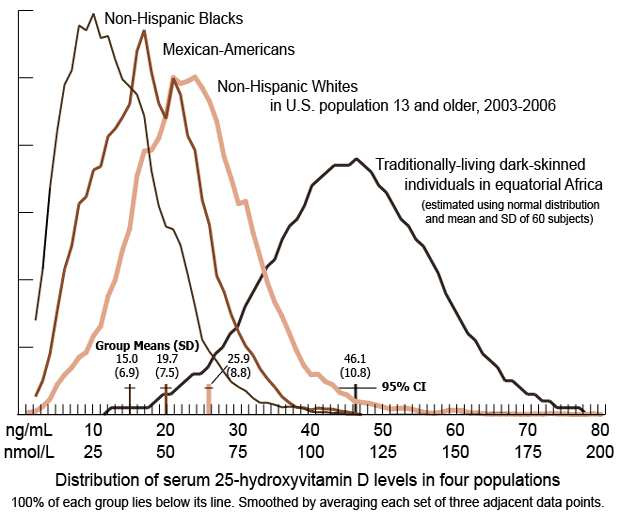 3 primates have higher levels of vitamin D than clothed humans, level varies between individuals – April 2015         Printer Friendly PDF this page! Follow this page for updates
This page is in the following categories (# of items in each category)
Veterinary and Vitamin D 138 Noontime sun and D 310

Half of dogs now get cancer, it used to be just 1 percent (probably low Vitam...