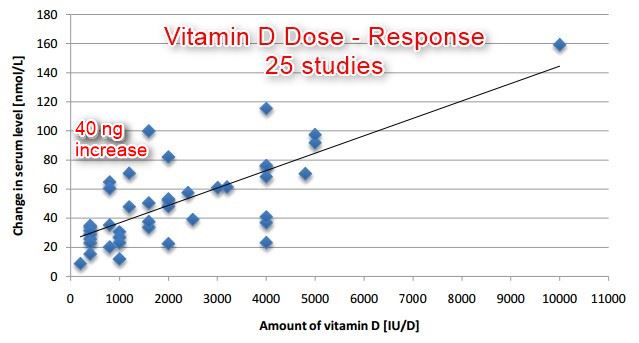 Recently there has been a resurgence of interest in the role of vitamin D3, or cholecalciferol, supplementation in disease prevention and health maintenance. Systematic reviews have recently been published with a focus on specific groups, such as those over 50 [1] or by body mass index [2]. Studies have been carried out on serum vitamin D levels to evaluate the role of supplementation on risk for multiple health conditions, ranging from bone health to cancer.
However, the benefits and risks of cholecalciferol supplementation are under debate after the publication of a 2010 Institute of Medicine Report that recommended supplementary and dietary reference levels for Vitamin D [3]. From an epidemiological perspective, cholecalciferol is unique, as it can be obtained not only through food and supplementation, but also from ultraviolet radiation, specifically UVB (280-320 nm) [4]. Thus, some groups have suggested that people increase time in the sun and forgo sunscreen in an effort to increase their serum 25-(OH)D levels [5]. However, because over exposure to UVB rays can also lead to an increase in skin cancer incidence, the health effects associated with UV exposure may be problematic.
Oral supplementation of Vitamin D3 may be a safe alternative to UVB and should be easy to regulate to achieve optimum dosage [6]. Unfortunately, outside of single studies, there is little research that evaluates the dose-response relationship between oral intake of cholecalciferol and subsequent serum levels of vitamin D. Because of this knowledge gap, we conducted a literature review to gain perspective on current knowledge about the dose-response of serum vitamin D with supplementation.

We reviewed studies identified through a combination of personal archives and the National Library of Medicine database PubMed using the search terms “vitamin D supplementation,” “vitamin D serum” “randomized trials of vitamin D” and “25-(OH)D.” The earliest eligible study available was from 1991 and the most recent was from 2013. Studies were excluded for incomplete, or inaccessible data, leaving 36 studies that were included in this review. Of these 36 studies, 25 were analyzed (Table 1) and evaluated through graphical analysis (Figure 1), and 11 were listed separately (Table 2) because of irregular dose patterns, such as a one-time bolus intervention. 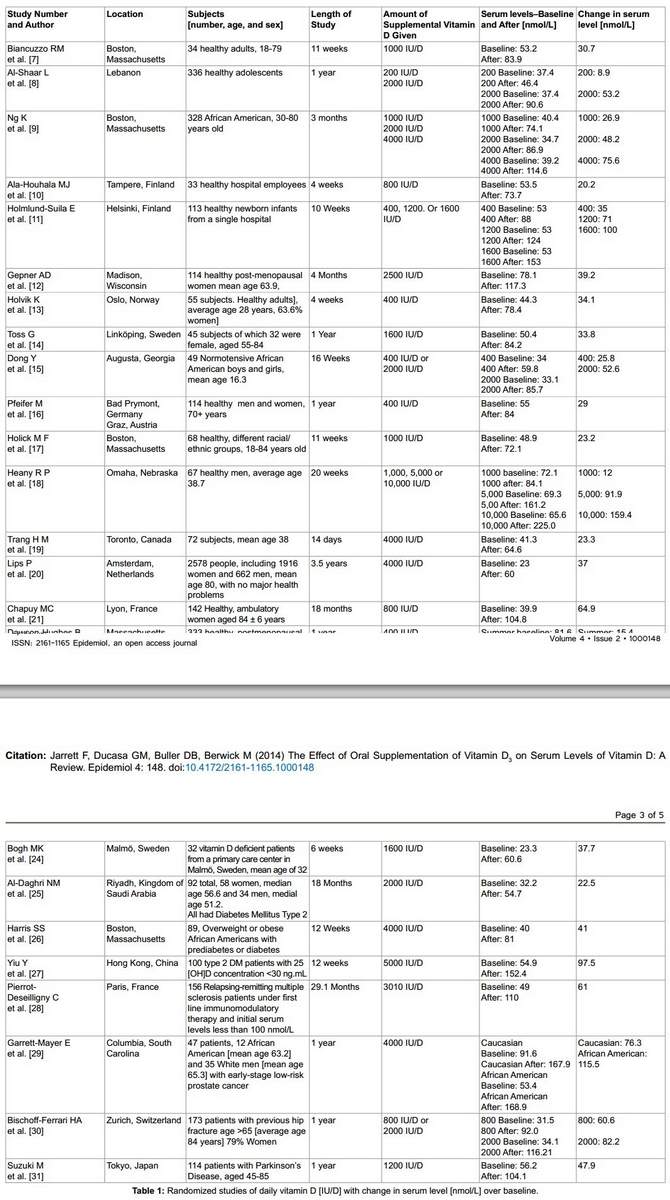 Not Daily (not included in chart?) 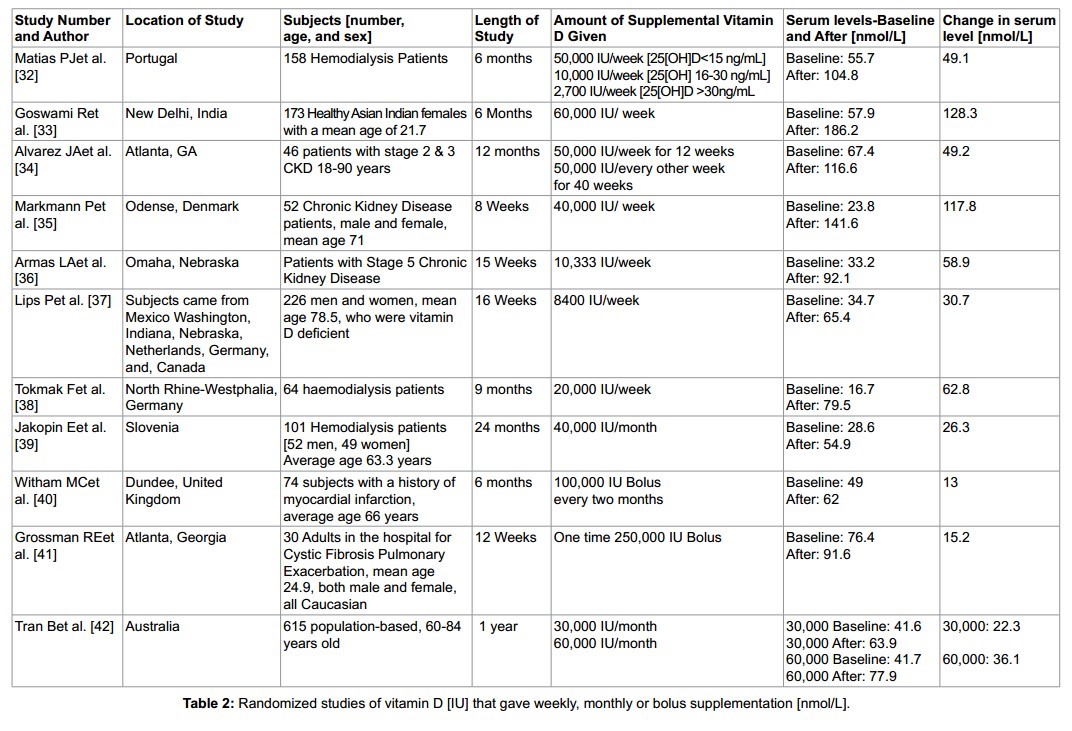 The studies we reviewed were chosen from available literature addressing vitamin D and met pre-determined criteria for involvement. These criteria included information as to the dose of oral supplementation of cholecalciferol (vitamin D3) and serum levels of 25-(OH)D at baseline and post-intervention and included placebo groups for comparison (Tables 1 and 2). We found that many studies looked at the effect of vitamin D supplementation and dietary intake on disease outcome. Sixteen studies meeting our criteria evaluated . . . . healthy individuals [7-22]. Nine studies meeting our criteria evaluated individuals with disease included individuals with vitamin D deficiency [23,24], individuals with diabetes [25-27], relapsing multiple sclerosis patients [28], individuals with early stage prostate cancer [29], patients with previous hip fractures [30], and Parkinson Disease [31]. The number of studies that included the necessary information on serum levels pre- and post-supplementation were limited, and only a few addressed serum vitamin D levels exclusively in response to oral supplementation.

Although we wished to perform a meta-analysis, we found that the data were too heterogeneous for valid statistical evaluation. Some of the factors that contributed to the heterogeneity included varying geographical latitude, age, pre-existing medical conditions, dose size, and calcium supplementation, frequency of dose, follow-up time, and overall quality of the study. In addition, we found that several studies did not include crucial information, such as standard deviation or baseline levels, because vitamin D was not the primary focus of their research. Studies that were not placebo-controlled, randomized, or had an inadequate sample size (i.e., fewer than 20) were eliminated from our main analysis. It should be noted that seven of the studies gave weekly doses of cholecalciferol (Table 2) while three others administered onetime only bolus doses. These two groups were evaluated separately and not included in the daily dose results.
In order to determine the change in serum vitamin D per amount of oral supplementation, we subtracted the baseline serum level from the post-intervention serum level and correlated that with the amount of oral vitamin D given. This information was calculated by linear regression using change from baseline serum vitamin D and with duration included as both a quadratic and linear term using SAS 9.3 (Carr, NC).

Analyses of the best available data show a clear trend. Figure 1, which shows the data from the twenty most reliable and homogeneous studies [7-26], exhibits a positive correlation between amounts of oral vitamin D administered and change in serum vitamin D levels. Figure 1 shows the change in vitamin D serum levels from the most rigorous studies that gave daily doses of cholecalciferol. These values are highly significantly correlated with a P-value<0.001 and an r2 of 0.61.
We did not analyze the data from Table 2 statistically because the data were too few for meaningful analysis.

These results demonstrate the overall coherence of the more generalizable studies, all of which were double blind and had an adequate sample size. Interestingly, our simple model is quite robust. There is a relatively strong dose-response between the amount of supplement and the change in serum vitamin D status. Surprisingly, results did not change significantly when we restricted them to studies of healthy individuals or to studies with intervention of 6 months or more. From the large scatter noted in Figure 1, it is clear that a great deal more information needs to be evaluated regarding the appropriate dose if vitamin D3 to raise serum vitamin D to a specific level. In addition, there is a clear need for additional placebo-controlled, double-blind studies to be conducted on the effects of serum 25-(OH)D levels in response to oral supplementation. One of the main limitations to our research was the fact that there are actually few randomized studies of cholecalciferol supplementation. To be useful for study of the effect of cholecalciferol on health and disease outcomes as well as clinical utility, it is important to know how different doses of vitamin D change serum vitamin D. Thus more studies need to be conducted on the oral supplementation of cholecalciferol before the scientific community can understand the importance of vitamin D supplementation to health.
Limitations include the heterogeneous nature of the studies and the fact that our analysis did not take into account the

in determining serum levels of vitamin D. In addition, the linear regression and slope determined using Figure 1, do not account for the “plateau” of serum vitamin D levels at high concentrations (e.g., 23). However, as a beginning, our study provides a baseline from which develop a more precise evaluation. This is especially important in light of the aging US population, the recent increase in interest in the role of vitamin D in disease prevention and the urgent need to carefully understand the role of vitamin D in health-whether it is a symptom of poor health or a means to better health.
Acknowledgements
This work was supported by the National Cancer Institute at the National Institutes of Health (K05 CA131675 to M.B).

The TOP articles in How Much Vitamin D are listed here: