Pharmacokinetics and safety issues of an accidental overdose of 2,000,000 IU of vitamin D3 in two nursing home patients: a case report.

CASE PRESENTATION:
Two patients, a Caucasian 90-year old man and a 95-year old woman, were monitored from 1 h up to 3 months after intake for clinical as well as biochemical signs of vitamin D intoxication. Blood vitamin D3 concentrations showed a prompt increase with the highest peak area already hours after the dose, followed by a rapid decrease to undetectable levels after day 14. Peak blood 25(OH)D3 concentrations were observed 8 days after intake (527 and 422 nmol/L, respectively (ref: 50-200 nmol/L)). Remarkably, plasma calcium levels increased only slightly up to 2.68 and 2.73 mmol/L, respectively (ref: 2.20-2.65 mmol/L) between 1 and 14 days after intake, whereas phosphate and creatinine levels remained within the reference range. No adverse clinical symptoms were noted.

CONCLUSION:
A single massive oral dose of 2,000,000 IU of vitamin D3 does not cause clinically apparent toxicity requiring hospitalization, with only slightly elevated plasma calcium levels in the first 2 weeks. Toxicity in the long term cannot be excluded as annual doses of 500,000 IU of vitamin D3 for several years have shown an increase in the risk of fractures. This means that plasma calcium levels may not be a sensitive measure of vitamin D toxicity in the long term in the case of a single high overdose. To prevent a similar error in the future, the use of multiple-dose bottles need to be replaced by smaller single-unit dose formulations.

PMID: 25269374
&nbspDownload the PDF from VitaminDWiki 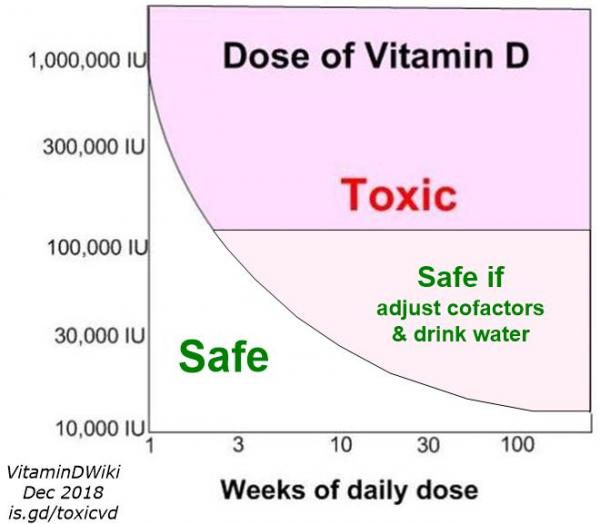